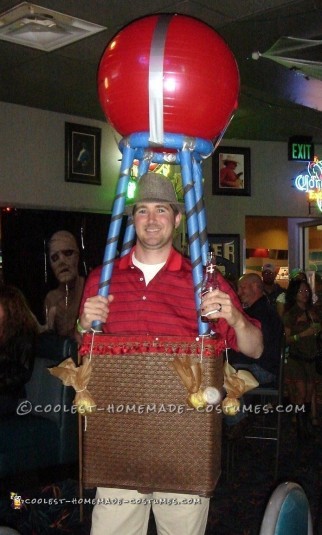 As a parent with two young children, I don’t get out very much. By some miracle (or a very well timed visit by Grandpa) my wife and I were able to sneak out for a few hours to attend a Halloween party at the local bowling alley which was having a costume contest. Problem was we had no costumes. So, we made a frantic trip to the store to gather up some materials, scrambled up some bits and pieces around our house and voila, the hot air balloon man was created.

We were going for the old man character from the kid’s movie UP, hence the button up shirt, khakis and old man hat. After searching around the house for a basket big enough, we found my clothes hamper. That hamper paid the ultimate sacrifice to be a part of something greater.

A foam ring at the top held up our massive red exercise ball (please note that we looked EVERYWHERE for a ballon big enough but found nothing in the stores).

The final touches were the weights which were tennis balls wrapped in parchment paper.   I zip-tied the hamper to my belt which was the only way I could think of to attach it to myself.  Needless-to-say I was pulling up my pants the entire night!

I’d say this costume was a big hit at the bar. I definitely got a lot of stares, laughs, high fives and “AWESOME!”s. I made it to the final round of the contest, but sadly didn’t win.  Not too shabby for throwing it together in an hour though!