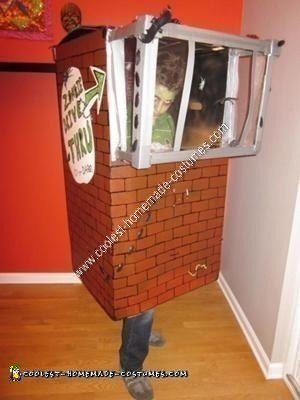 On a drive from Chicago, my son Cameron and I started the planning for Halloween 2010. Having officially won best costume all four years prior, Cameron opened with “Mom, I have a rep. to protect.” Hi reputation is for totally original costumes of a mechanical nature. We think we outdid ourselves this year.

Cameron thought about it for a while and continuing with the mechanical themes of previous years, he thought of a “fast food drive-thru window.” Mom thought, very unique and but sounds hard. Once we got started, Cameron was told his middle school costume contest was a Zombie theme. This was an important part of our inspiration because it became much more fun after that and we settled on a “Homemade Zombie Drive Thru Original Halloween Costume” and got to work.

We started with a U-Haul short wardrobe box. After a couple of coats of black spray paint inside and out, we used an acrylic base for the bricks. For the window frame we used an election yard sign for the top and coat hangers for the frame of the window. We covered them with cardboard and foam core then coated them with duck tape. A level, some sharpies and many late-night hours produced a believable brick pattern. Cameron developed the “Taco Hell” logo, menu and signage. Acetate for the windows, and a foam core covered with contact paper for the counter, completed the basic structure.

The trickiest part was the harness on the inside to hold it at the right height while keeping at least one hand free. We ended up using a belt with grommets and holes he happened to have and links of cable ties to get to the right height. (This was not the fun part.)

For the costume, Cameron wore a golf shirt with his Taco Hell logo, zombie face makeup and headset. The spooky effect was enhanced by a flashlight taped to the front wall and shining up to his face, which is very effective in the dark.

Once we had the whole thing basically structured and made, we used various snakes, cockroaches, insects, bats and spiders to add to the overall spooky feel.

A very nervous Cameron and a very exhausted “Zombie-Mom” , having spent four consecutive 2am nights, went to the Zombie-themed costume party at his middle school Friday, October 29. We’ll mention that the building doesn’t come close to fitting in a sedan so we had to hire a taxi van to get to the party. Cameron ran away with Best Overall Costume with an enthusiastic crowd chanting his name by the end. He even managed to sell a respectable number of snakes and insects out of his window for tidy profit.

We enjoyed working on this together, and for the many, many hours we spent together will be a memory we will always have.

P.S. We have more photos and some “making of” also. 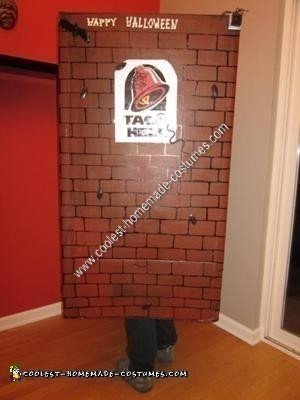 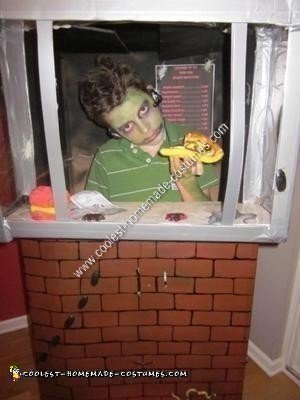 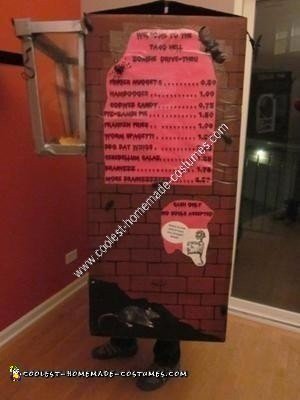