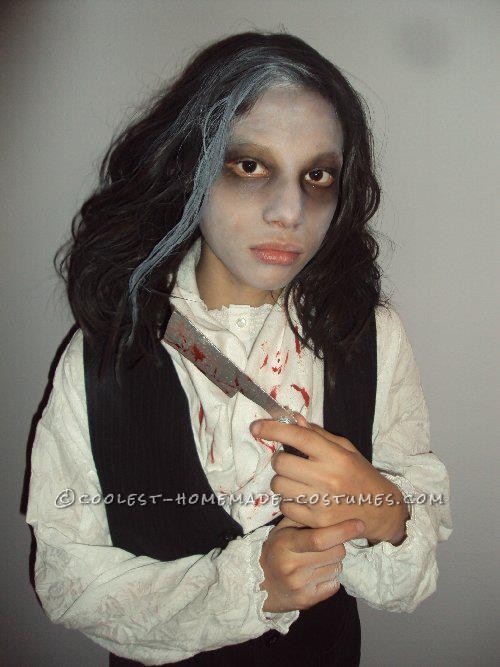 Last year ,my son was watching spooky movies during the Halloween season and decided he wanted a Sweeney Todd Halloween costume. I have always created costumes for both of my sons for different occasions and being a theater buff, I was ecstatic to take this one on! He already has long, straight brown hair, so I sprayed it black and teased it. I took one small section of the hair in front and sprayed a white streak.

I have a ruffled white blouse and pinned it to fit him. He borrowed my older son’s striped vest and wore a pair of black slacks. To give him the look of a bloody ascot-sort of look, I cut the bottom of a small white t-shirt, placed it over his head and made gathers in front. I then used fake blood to make smudges on it. I painted his face with white cream make up and used black and brown matte eye shadows to shade his eye sockets to  give him a sullen, dead look inspired by Johnny Depp’s character in the movie.

Last but not least, I cut an old fashioned style shaving blade and a handle  from heavy cardboard. To make it appear to open and shut, I attached the two pieces using a brass brad and painted it all with a sharpie and silver, metallic  paint pen. 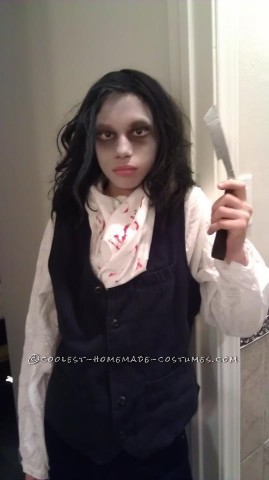 Ash and Linda Costumes from the Evil Dead