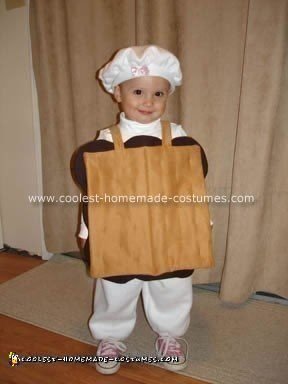 This is little Violet in a Homemade S’mores Halloween Costume! I had the idea for it when my daughter was asking me for some marshmallows (which she just loves), and I told her she was going to turn into a marshmallow and realized she’d make a cute S’mores. She is the marshmallow and she’s sandwiched between two graham crackers and some chocolate.

The pink bow on her hat and the super cool pink converse shoes are to let everyone know this S’mores is a little lady! The graham crackers are made of a suede-like material – I tried to make them as close to the real thing as I could measuring out the distance between the holes and everything, they’re connected front and back at the shoulder by straps. The chocolate is dark brown muslin – I played around with the shape a few times before settling on a scallop pattern.

The pants and hat are white fleece and the turtleneck shirt is purchased. I’m mostly proud of this costume because I did it with no patterns (something I’m not used to doing) and haven’t sewed in quite a while.