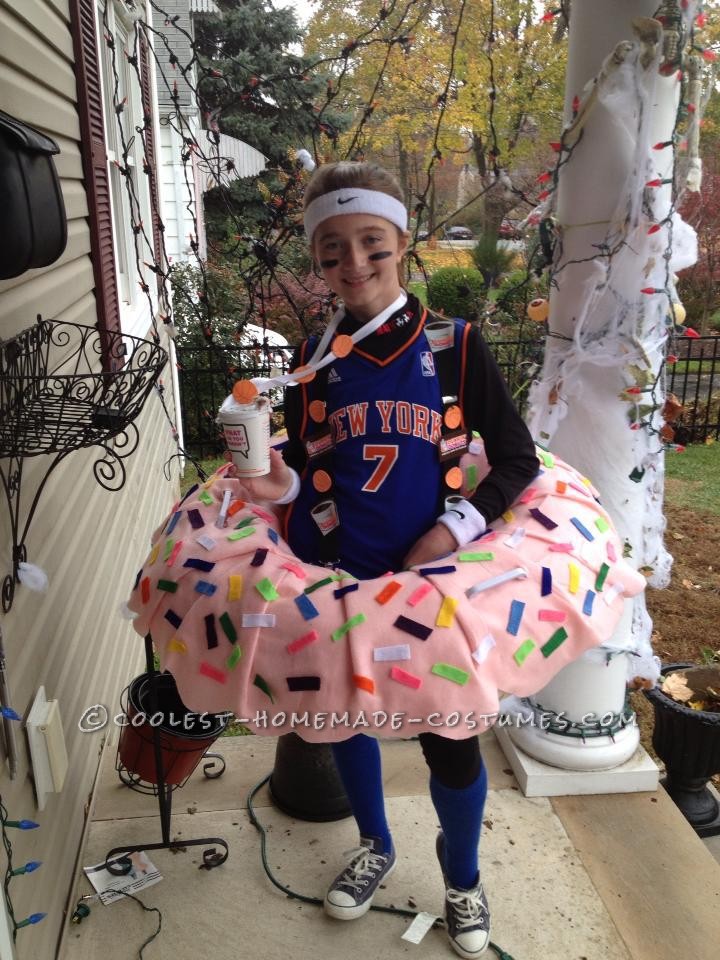 Who wouldn’t  want a Dunkin Doughnut, I made this costume for my daughter who is into sports and loves Dunkin Donuts.  She wanted a costume that would stand out and something that wasn’t to much to handle while she was in school and trick or treating.

Like anything the first time you try to create something you learn from your mistakes… I ran out to buy the supplies and figured I would stuff the donut with batting and cover in felt.  But to my surprise it was harder to stuff the felt with and make a perfect round donut  as well as cutting out the hole in the center.  I decided to take a break and ordered her Basketball jersey because she was going to be a dunkiin doughnut. Get it dunk , like when they dunk a basket. Of course she had to have a Knicks Jersey.

What a relief that order was placed and part of the costume was taken care of.  After a few days of brain storming I came up with idea of blowing up a large pool tube.  This time I searched Joanne Shops for something that was the same color as a donut but was much lighter fabric.  I found some muslin which is the perfect beige color with texture like a real donut.  I wrapped the muslin through the hole of tube all the way around in and out then tacked with needle in tread to give a clean effect (remember to mark where the spout is to deflated tube when done).  I then decided to use some hot glue and glue the muslin on edges .

Then it happened, my donut deflated, seems the hot glue dripped on the tube and made a tiny whole.  Back to square one, buying muslin, blow tube, wrap muslin in and out, tack muslin, and oh so carefully hot glue so it sits securely for when she walks around. A big sigh of relief when that part was completed. Now it was on to the fun part.  The big question was what color icing would you be if you could be a Dunkin Doughnut.  So it was back to Joanne Shop for some felt, so many choices did she want to be a vanilla frosted, chocolate frosted  or strawberry frosted.  After about an hour and many customers giving us their opinion my daughter decided she would like to be a strawberry frosted donut with rainbow sprinkles of course!  We purchased several sheets of all different color felt for the sprinkles and about 3 yards of a very pretty shade of pink felt for the frosting.

Once we were home I inflated the tube with muslin and draped the pretty pink felt over the the doughnut and began cutting the edge in a wavy pattern to make it look like the frosting when it drips down. I then glued it down with  tacky glue and let it sit over night. This time was not making the mistake of using the hot glue and risk the tube from deflating. The next day I had my daughter step into tube for sizing and to see how the pretty pink frosting looked while checking the edges of frosting.  Then we cut smaller strips from the different color felt we purchased.  We had a fun time placing the rainbow of colored felt or shall I say sprinkles on our pink frosted doughnut. In my opinion rainbow sprinkles can make anyone smile and that it did!.

We used tacky glue and let it dry over night. Once it was dry I had thought about a way she could wear the costume with out having to hold it all the time. So I purchased a set of suspenders and attached by cutting a small slit in the felt and slipped the metal clasp in and attached them to the muslin. The suspenders held the donut up .

The day of Halloween was beautiful so she was able to walk to school.  Boy! did she get attention people loved the costume.  It took a moment but when they realized she what she was they giggled.  One women said it made her want to go and buy a cup of coffee and strawberry frosted donut.  Her basketball coach said she would make a great mascot for the basketball team.  At the end of the day she won most original costume for her school. The costume was a big hit, it’s one of my favorites to date.  So inexpensive to make if you already have a basketball jersey.  A little price if you order one like we did but well worth it.

The other plus to this costume is once you are done you just deflate the tube and store it away for the next time you need it.  I used one of those nice zipperd plastic packages you get when u buy a good set of bed sheets.  I totally recommend this unique and fun costume for a boy or girl.  I recommend you do  a vanilla or chocolate frosting for a boy.  Enjoy! 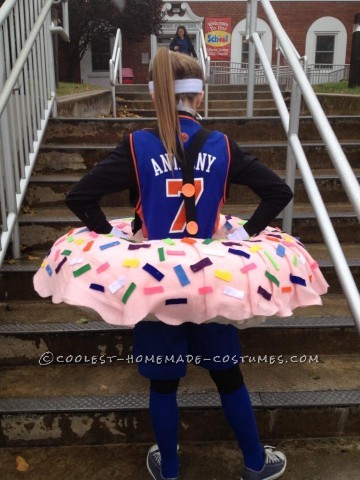 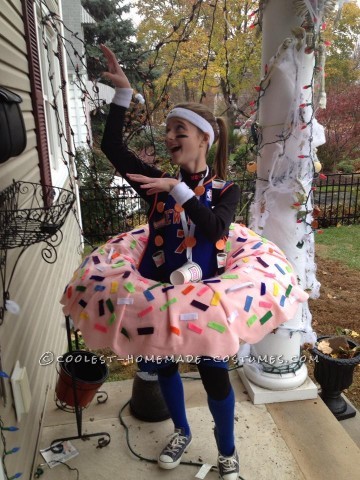 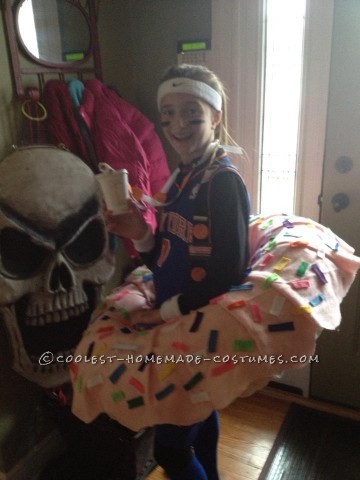 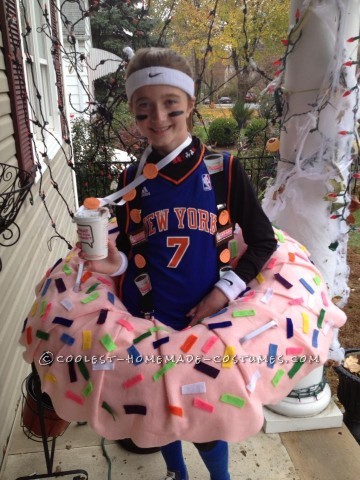