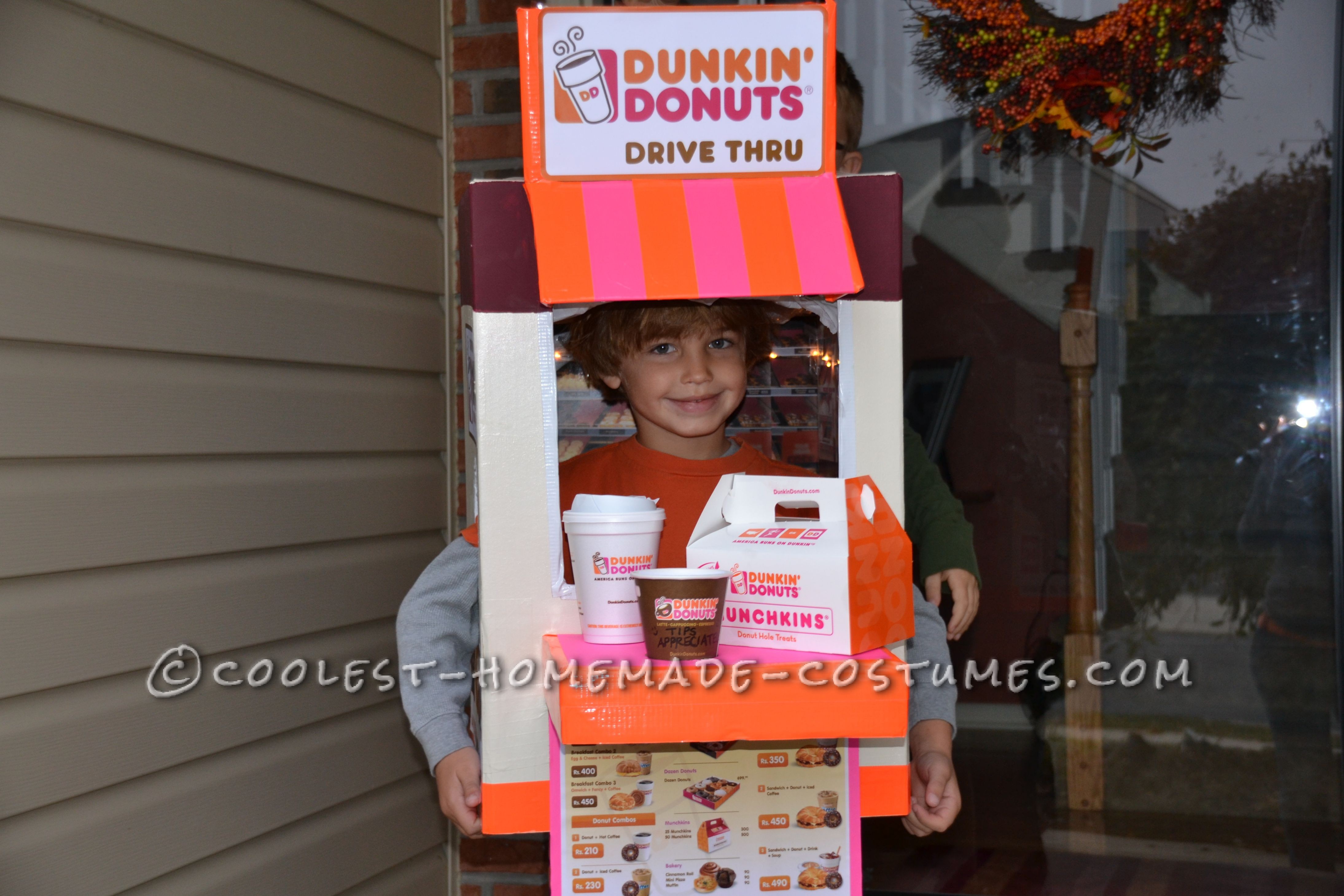 We have three sons.  Each year I try to make at least one homemade costume.  We’ve had a scuba diver and a vending machine, but this year we made our best yet – our very own Dunkin’ Donuts Drive Thru.  We had so much fun making it – it truly became a group effort.  My husband and I are both addicted to DD – he loves their coffee, I love their iced tea – most likely its just the caffeine LOL.  Anyways, last year our middle son Justin was a vending machine and loved that some of his uncles bought the candy from his costume.  He wanted another costume where he could ‘make money.’  We thought for a while and then decided on the drive thru so he could ‘sell’ munchkins.  The costume itself was really inexpensive, just a little labor intensive.

I used a 16x16x16 box with reinforced tape to make sure it was sturdy.  Then I cut out a window and painted it with some leftover white paint we had at the house.  I went to the craft store looking for supplies that were pink, orange and purple.  Randomly when you start to notice the DD stores, they are all a little different but usually use purple.  I ended up with pink and orange colored duct tape and purple paint.

When I got to work about a week before Halloween, I asked Shannon our longtime friend and graphic artist if she could print me colored DD signs on her big printer paper.  I had my white box and bag of supplies and tried to explain that I wanted either a roof or an awning, a tray, some signs on the outside and then wanted to put a picture of donut racks inside.  Shannon went to town.  Apparently when she went to download some images from the web they weren’t high res enough so she redrew them on the computer.  If you don’t have someone like Shannon who is awesome at that stuff she said she found a Dunkin’ Donuts font that you can easily download.  Then she had the idea of adding drive thru menus and the high sign.  What became hilarious is that her office is in the front of the building so as people would pass by and see what we were doing, they all added ideas.  Too fun.

By the end of the day the top sign and awning in place.  They were both made out of cardboard that was cut and taped to the box.  The awning was made with the orange and pink duct tape.  We couldn’t finish the costume because we needed Justin to try it on so I could cut armholes.  I also hadn’t figured out how I was going to get the box to rest comfortably on his head.  We thought about shoulder straps, but with the drive thru cutout window there was no place to anchor the straps.  When I showed my mom after work, she had the idea of using old egg crate mattresses – worked perfectly.  Justin tried on the box and we added the foam until his forehead could see easily out of the window.  Then we added an additional layer and cutout a hole so that it cupped the top of his head and didn’t let the box slide around.  We taped the mattress in and covered it with a white kitchen trash bag to look like a ceiling.  We also cut out the armholes.

The next day at work we put on the final touches – a purple painted stripe, the various signs and menus.  We changed the “America runs on Dunkin'” slogan to Justin’s name and added his picture, which he loved.  Shannon made the tray out of a little cardboard box we had at work – neon paper on top – super easy and sturdy.  Since the inside of the box was filled with racks of donuts and even some of the DD machines (Shannon’s awesome!) we were concerned people may not see them so I ran to a Party City and bought battery-operated lighting.  We put one strand of lights inside.  We then put to (twist on) tea lights up inside the awning so it would shine down onto the tray.  We actually put the tealights on the box itself under the awning so it wouldn’t shine in his eyes and another lady (Debra) at work had the idea of adding reynolds wrap under the awning so it would reflect the light down onto the tray – such a great idea.  We added the various cups and munchkin box and made sure to add in a “tips please” note on the cup so Justin could “sell” his munchkins.

When Justin saw his finished costume he was beyond excited!!  He loved it.  The day of Halloween our whole family went to our DD before school so he could show them.  The staff loved it and gave us everything for free.  He then had his school parade and went trick or treating that night using a DD bag as his treat bag.  His friends loved getting the munchkins.  All in all it was great.  The only thing I may have changed was Shannon and I think we should have lit the top sign – would have been cute.  However, no regrets!!! 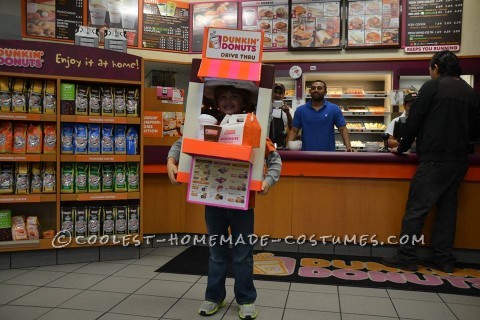 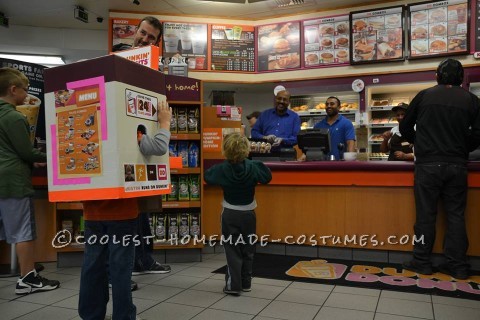 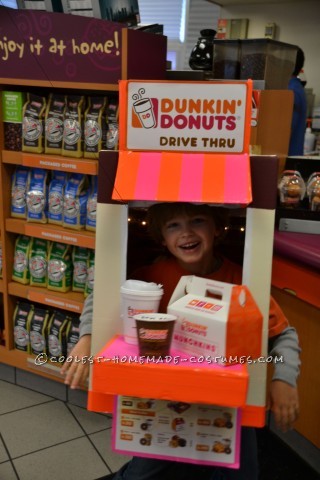