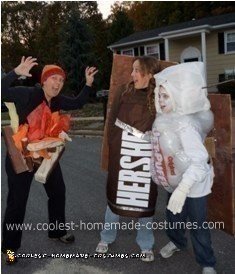 We are huge camping fans, so S’mores are a staple for our family. My son had the idea for the DIY original S’mores trio group costume, but turning that into a reality fell to me.

The Hershey’s costume was the easiest. I used a single curtain panel and cut the bottom hem off to make straps. The letters are sticky-backed foam. I found a free Hershey’s font on-line and blew them up to page size. Some aluminum foil made the open wrapper final touch.

The base of the campfire was a pool ring toy. The logs we made by wrapping actual logs in wax paper and applying a strong coating of paper mache. After cutting out the logs, I hot glued them closed and spray painted them. They are assembled to the ring with wire. Tissue paper made the flames, and glow sticks were set in behind the paper for a glowing effect.

The marshmallow head is a box with a pillow case over it and some stuffing to make it look puffy. Be careful if you use a roasting stick like we did… don’t poke any eyes out. The body is a trash bag filled with white balloons and a cardstock logo taped on. I taped the arm holes so the bag wouldn’t rip. I applied a wire collar at the top so he wouldn’t be choked by the bag. The graham cracker backs were spray painted cardboard.

We each had on a belt with an extra piece of cardboard attached to it so the cracker wasn’t right against us as we walked.

This DIY original S’mores trio group costume gained rave reviews all over the neighborhood, and was plenty of fun! 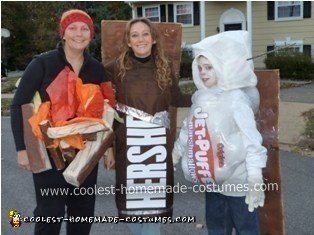 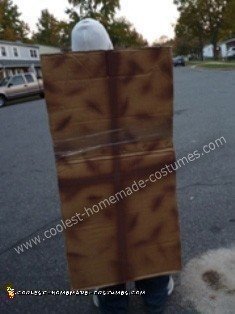 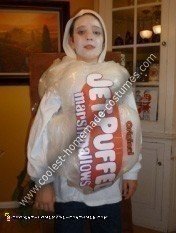