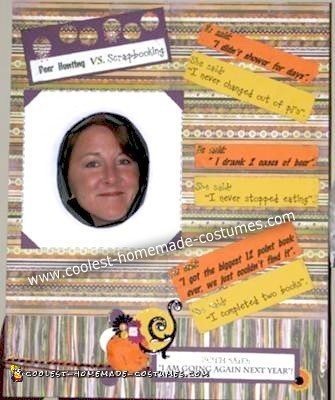 While attending my daughter’s softball practice, some of the dads were sharing their weekend hunting trip stories. I then told them how excited I was to be going scapbooking the following weekend. They were astounded and asked me how a whole week-end could be spent scrapbooking! I explained that it was not so different from deer-hunting weekends but none of them bought this. Knowing I would be seeing the dads during the annual softball Halloween party, a sudden bright idea came to me: I would make a Scrapbooking Page Halloween costume.

I made this costume out of common scrapbook papers and embellishments. As I do when scrapbooking, I moved around the stuff until I found the layout that worked. Everything was then glued down and I cut out a hole for my head.

I spent about one hour on this costume and only spent $5 as I had most of the supplies in the scrapbook room. Seeing one of the hunting dads speechless was priceless!