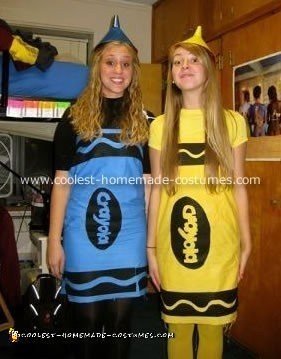 Well it’s freshmen year of college, and it’s Halloween time. My friend and I didn’t want to be the typical nurse, French maid, or police officer that you generally see around college campuses at this time of year, so the costume brainstorming began. I was browsing some costume search engines when I came across Crayola Crayons. I tried out the idea on my friend and she agreed, Crayola Crayons Halloween costume that’s what we were going to be.

I Googled the costume and came up with some ideas for how we were going to complete it. After a run to Walmart, our materials consisted of:

Two red gas funnels
Two white standard size pillowcases
One can of yellow spray paint
One can of blue spray paint
One pouch of yellow fabric dye
One pouch of blue fabric dye
Fifteen sheets of black felt (fifteen was not nearly necessary, but I wanted to be safe)
One pack of StitchWitchery (an amazing creation which when placed between two layers of fabric with iron applied adheres the layers to one another)
Total money spent: $21, divided by two people: $10.50 each!

Our costume creation saga began on Thursday night before Halloween (I suggest you start your costume maybe just a bit earlier then this, but we work best under pressure) We cut the bottoms, and then dyed our pillow cases, one yellow and one blue, and they turned out spectacularly. Friday night (again, punctuality is a good skill to have), we began by spray-painting our funnels. We borrowed a friends white spray paint to use as an undercoat to cover the red. Then we sprayed them blue and yellow, again turning out spectacularly.

We taped headbands to the inside of the funnels in order to make sure they would stay firm on our heads. Then it was onto the felt. We cut the pages of felt in to three strips, and then cut each strip in two, following the squiggly line of Crayola. We adhered them to the bottom and top of our pillowcases using StitchWitchery. Next, we cut out the Crayola logo and adhered that as well. With a little more time, StitchWitchery could have been used to hem the bottom of our cut pillowcases to avoid the eventual fraying which occurred, however we were running low on time.

All that was left was to add the necessary clothes items used from home, our shirts, stockings, and shoes. And there you have it, Crayola Crayons!

Our costumes were a big hit throughout the night. We got several questions as to where they were purchased, which we took as big complements. Perhaps the best remark was from a worker in our college dining hall who said, “Those are the cutest and classiest costumes I’ve seen all night!” He hit the nail right on the head, exactly what we were going for! 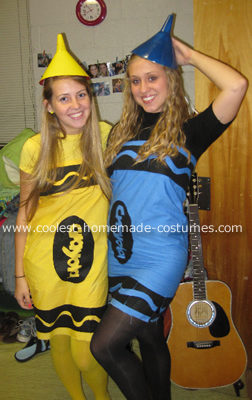 Best Ever Crayola Crayons and their Box Costume