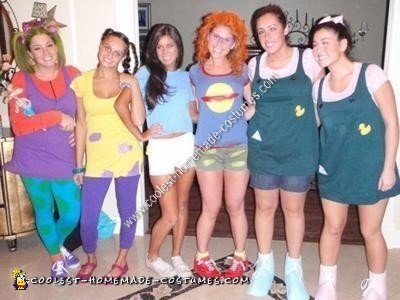 Angelica is a total brat so we made her act it all night. For her hair we sprayed it yellow and put big purple bows in made from ribbon. We took a long sleeve orange shirt and drew black stripes down the arms. Her blue leggings we used fabric paint to spray green dots. Orange socks and white skippies we sprayed purple. To complete the look she carried around a Barbie we like to call Cynthia.

Susie was easy. We braided her hair in three. Bought a yellow t-shirt and cut up purple felt for her design which was hot glued on. Purple leggings and flats.

Tommy was simple as well, just a baby blue kids t-shirt white shorts and yellow tape on each side for the diaper.

Chuckie’s hair was sprayed orange after it was thrown into a mess. Purple sunglasses were used and we just popped out the lens’ and added freckles. a blue t-shirt was bought along with yellow and red fabric paint to paint on the planet and the red lining of the shirt. Green shorts were bought and also painted on yellow stripes. Yellow socks and a pair of old white sneakers were spray painted red and because his laces were always untied, bought those curly laces.

Phil and Lil were just teal t-shirts cut up to look like jumpers. they bought pink t-shirts and also drew stripes on them. The shoe covers were bought in Target to make the shoes look more cartoony. They hot glued a white piece of paper to look like a hanky and little duck on the jumper. Lil wore a bow and Phil wore shorts. 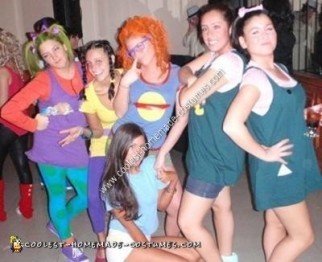