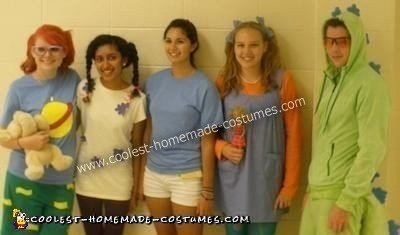 Tommy, Chuckie, Angelica, and Susie hit high school! And who do they meet there? Only their favorite reptile, Reptar!

REPTAR – The Reptar costume started out with a white sweat suit which we dyed green. We also dyed an additional long sleeve shirt green so we could use the sleeve as a tail later. The tail was attached to a belt so it was possible to sit down later. The spikes down his back are made from a blue foam cut out into shape and hot glued on. Finally, his eyes are a pair of bright orange safety glasses with details drawn on with a sharpie.

ANGELICA – Most of Angelica’s costume was the result of going store to store searching for the right items. Her dress was found in a thrift store, but it was really long, so we cut it down, hemmed it, and used the cut-off fabric to make bows. The bows are just folded and hot glued into shape, then hot glued to hair elastics. The orange shirt was a tacky Halloween shirt found cheap at Kmart.

Out of picture are shoes. For Angelica’s purple shoes, we just painted an old, unwanted pair of slip-ons purple with fabric paint and she used a pair of orange socks she already had. The hardest part were her tights: she is actually wearing 2 pairs. We carefully cut small holes in the blue pair and quickly painted a ring of clear nail polish along the cut edges before stretching them to help resist runs. She wore this on top of the solid green pair (both pairs were found on a discount rack at Walmart.)

Of course, Angelica is nothing without CYNTHIA. She was probably the most fun to make. We took a Barbie found for 99 cents at a thrift store and mutilated her hair with scissors and handfuls of Elmer’s glue. Her dress is made out of an old sock who’s partner was thrown out because of holes. We cut a hole in the toe for her head, slipped the sock on, and approximated where to cut arm holes.

To tailor the dress, we folded it in the back and held it with a few drops of hot glue. Because the sock was originally pink, we took sharpies to color it orange and draw on the red stripes. Finally, to make her look a little more beat-up and abused, we burnt a piece of cork and dabbed it on her face to make her look dirty.

TOMMY – Tommy’s costume was the easiest. The t-shirt was purchased at Michael’s (along with the shirt for Chuckie) and the shorts were previously owned (this costume was for school- a diaper wouldn’t have gone over well with the administration). To finish things up, we just added 2 pieces of yellow construction paper to mimic the tabs on Tommy’s diaper. She had a screwdriver, not pictured.

SUSIE – Susie’s shirt began with just a yellow t-shirt (it looked yellower in person), with paper flowers pinned on (we wanted to paint them, but we didn’t have time). For a bottom, she just wore a pair of purple leggings. After putting her hair in Susie’s signature 3 braids, she was ready to go.

CHUCKIE – Chuckie’s shirt was carefully painted with puffy paint. The shorts were a pair of green men’s gym shorts borrowed from a friend. The yellow strips were duct tape cut to shape and stuck on (this proved annoying. If you have a pair of shorts you don’t care about, I suggest painting them if you can).

For Chuckie’s glasses, we popped the lenses of a pair of 3D glasses taken from the theater and painted them purple. Her hair was colored using temporary spray color. After grabbing a stuffed animal for comfort, this costume was done.

Everyone at school loved our DIY Rugrats group Halloween costume. We all grew up watching Rugrats, so people were thrilled to see their favorite character walking down the hall. For the most part, these costumes were all very easy. The hardest part was often just finding a suitable dress of pair of shorts (the shorts because they’re out of season, the dress because we were looking for something cheap and much more modest than you find in most junior’s departments). We had a great time in our costumes– and acting like dumb babies!