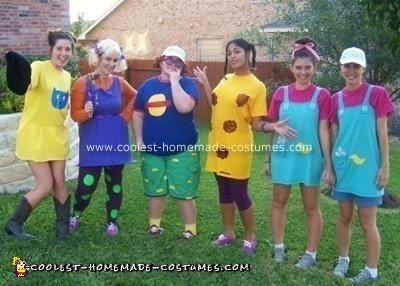 Here’s our rendition of a homemade Rugrats group costume. Everyone remembers watching those adventurous toddlers on TV. My friends and I decided that they would be the perfect bunch to be for Halloween. They are all easy to recognize and seemed simple to make. We are all pretty cheap so we wanted to keep this Rugrats Group Costume as least expensive as possible. On Halloween, everyone instantly recognized who we were and were impressed with our homemade costumes!

Unfortunately, the day of our pictures our Tommy got really sick and wasn’t in them… But his costume was probably the easiest. A big diaper, a small light blue shirt, and a screwdriver! For the diapers we bought adult Depends in the largest size. All of us wore them under our costumes. Also, since we’re obviously all girls, the boy characters wore white hats with the character’s name on it to put their hair up.

Phil and Lil’s costumes are made entirely out of a large tshirt. We simply cut off the top and glued on straps to make our jumpers. We used puff paint to draw the ducks, buttons, and black stripes on the pink undershirt. A white bandana was cut for the hankie and the pocket was made from left over material from the shirts. Phil had blue shorts on under and Lil had a big bow. They wore matching shoes and socks.

Susie bought 2 yellow tshirts and used one of them to extend the other into a dress. Finished off with purple shoes, leggings, bracelet, hair bows, and flowers completed her costume!

Chuckie’s was definitely the most fun to make! We found plastic glasses and wrapped them in purple duct tape. Plain green shorts with strips of yellow duct tape matched the yellows socks and red shoes (untied of course!). Puff paint was used to make the planet and red trim on a dark blue tshirt. We sprayed her hair orange and tied it up crazy to give her Chuckie’s unique hair.

Angelica presented a challenge with her flared purple jumper. We bought a metal hoop at Michael’s and glued it into the bottom of a large purple tshirt and cut the top to turn it into a jumper. Puff paint was used to make the green dots on the leggings and the black strips on the shirt. A blonde wig and purple ribbon made her look more the part. Angelica is nothing without Cinthia! An old Barbie was dressed and made over to look like Angelica’s best friend.

Finally, Kimi was dressed in two tshirts. One large and one small. The large shirt was cut and glued to the small one to make a pleated skirt. Cowboy boots, a beret and a puff paint blue cat finished off her costume.