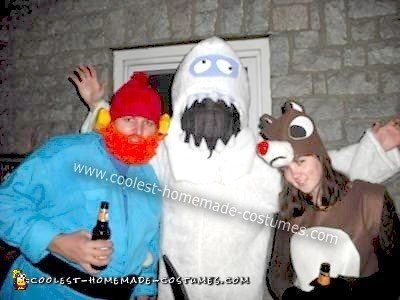 Based on the 1964 Rankin and Bass holiday classic Rudolph The Red-Nosed Reindeer, the Homemade Rudolph the Red Nosed Reindeer Character Costumes were created to capture the true fun of the characters Rudolph, Yukon Cornelius and Bumble, the Abominable Snow Monster of The North. Rudolph and Yukon costumes were hand-stitched, using very simple patterns. And Bumble’s body was simply a modified bunny suit. The details are what sells these costumes.

Rudolph’s hat was a simple hand-stitched cylinder with big eyes, small antlers and ears that stand up thanks to pipe cleaner. The nose was part of a 20oz soda bottle with a plastic shell from a vending machine painted red, the whole thing wrapped in dark brown and then two extra pieces (brown on black) to add a more realistic dimension to the mouth.

And Bumble’s head was nothing more than a old hockey helmet with the cage covered in sheer black fabric, and then white furry fabric over that. With a hole for the purple “eye” section, we went with the “Bumble got hit in the head” look by putting the pupils in opposite sides. A little more purple for the gum’s and foam teeth added the finishing touches.

Grandma Got Run Over by a Reindeer Couple Costume