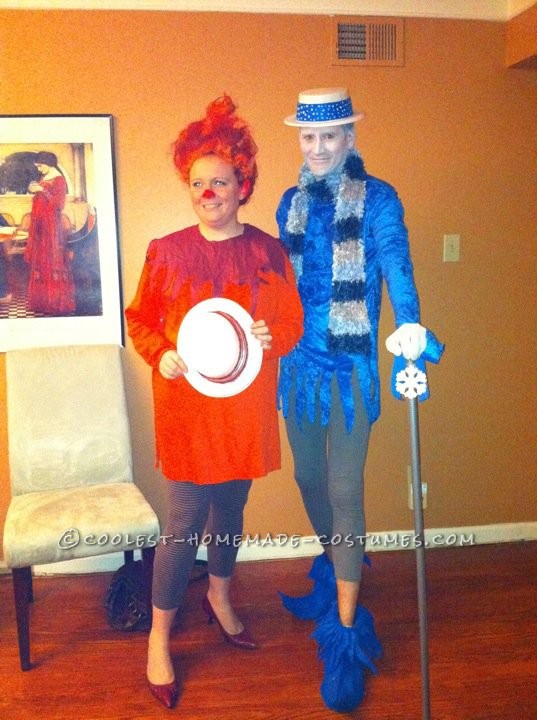 The night before our friends’ Halloween party in Cincinnati, we were faced with the expectation of surpassing our previous year’s Frankenstein and Bride of Frankenstein costumes. I’d always wanted to use another holiday (particularly Christmas) as inspiration, and this was my favorite TV special.

It’s pretty clear from the photo that I spent more time on the Snow Miser than Heat Miser.

I began with the shoes, made from cardboard cut to fit the heel and length of his foot, with a long point on the end. I traced and made another. From blue felt, I then traced the side of his foot and made four of those, shaped like a boot, as well as four felt copies of the cardboard “soles.” I used my sewing machine to encase the cardboard in the felt shapes on both top and bottom, then sewed the boot shapes together vertically from the ankle down to the heel. I sewed the heels of each boot down to the back of the soles, then around from the back on either side to the toes. I then turned each sideways to sew from the toe up to the front of the ankle. The frilly tops of each shoe were made by stringing the scraps from the cutouts on thread and basting to the top of each shoe.

The tunic for the Snow Miser was made by tracing his body from the wearer onto the back of the fabric and making two pieces (front and back) and sewing them together. I actually placed the “tube” around him after this and cut to adjust the sleeve holes and neck while he wore it. I then (from another tracing) made two tubes for the arms (one piece for each, just wrapped around) and basted them to the tunic body as he wore the garment before taking it off and sewing them on for good. I took scissors once he was wearing the finished tunic to make the fringe at the bottom and cut wavy shapes, rather than just straight lines up.

The cane was PVC pipe with a rubber ball on top, covered in gray duct tape, with a cutout white felt snowflake tied on. The hats were purchased from a party store and I added the felt, painted hatbands. Cold Miser is wearing white costume gloves and white powder makeup from Ben Nye, as well as a thrifted scarf and Target leggings in gray.

For Heat Miser, as I was running out of time before our two-hour drive to the party, I used pointed red shoes and brown striped tights from Target, as well as the same party store hat with a painted felt band. I basted my cutout wavy red fringe made by cutting a “sun” shape from a circle of fabric (then cutting the head out) to a thrifted orange sweater.

For Heat Miser’s hair, I used, red, orange and yellow hair sprays from Walmart. They aren’t opaque on clean hair, however, on top of powdered/hair sprayed hair, they can be quite bright. I began by turning my head upside down and spraying with regular hairspray. I then made a small pony tail from the hair in the center/crown of my head and pulled the tail only halfway through. By teasing the hair surrounding it, spraying it, and bobby pinning each new “puff” to the center piece, I “built” the hair out from the center. By the time I had just a thin layer of hair left surrounding the center, I started grabbing a strand, spraying it with a color (alternating for depth) and pinning just the end to the top of my head. When I finished, I added a few pieces of faux spider web in areas where I wanted yellow because the spray showed up better on it. By the end, I sprayed some of each color all over the finished “do” just to make it brighter.

I painted my nose red and we got in the car. I don’t even know how to begin to top this in the future. LOTS of fun and not too much work for a good looking costume.