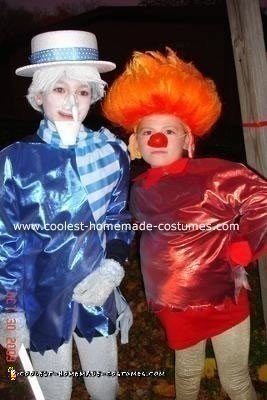 I don’t know about the rest of you, but one of my all time favorite shows at Christmas Time is the 1970’s classic “The Year Without a Santa Claus”. We always watch this special as a family and I have passed down a special childhood memory of mine to our 3 kids. My 11 year old daughter came up with the idea this year of Homemade Snow Miser and Heat Miser Costumes.

For Snow Miser, I found the hat at a local costume store and changed out the ribbon, took a black wig and spray painted it white and added “sparkles” to make it look like ice/snow. The nose was a witch nose that I painted white, and the chin was a devil chin that I also painted white.I bought fabric at Joanne’s to make the shirt. The scarf and gloves were pulled out of our “winter” box, I used painters blue tape to stripe the scarf, and the tights were also found at a local store. We painted my daughters face white to finish it off.

For Heat Miser, I found the orange/yellow “hair” at a local craft store, took a yellow winter hat and sewed it all on the hat. I used spray glue to “spike” the hair up and I sewed large red pointy ears onto the flaps of the hat. Again, bought fabric at Joanne’s to make the shirt, red felt to trim the neck and wrist lines.Gold tights from another local store.

Unfortunately, my husband ended up sick on Halloween this year so I was on my own with 3 kids, pictures were an after thought!