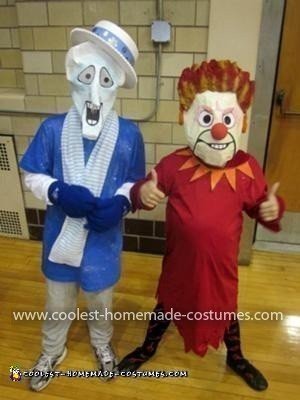 Each year my children pick costumes for us to make for Halloween. This year was the most challenging, Heat Miser and Snow Miser from “A Year Without a Santa Claus.”

The hardest part of the Homemade Heat Miser and Snow Miser Costumes were the masks. We made them out of paper-mache. As a form, I used a “Scream” mask for Snow Miser, and modified it with tin foil before covering with paper mache. As for Heat Miser, we used a hockey mask with foil on it as the form over which to cover with the paper-mache.

Once they dried (3 coats), we painted them, and decorated them as well. For the mouth details, we used thin black and white foam cut to fit as needed. Same with they eyes. The openings in the eyes were covers with painted screen, so the kids could see out of them. For icicles on Snow Miser’s nose, we used glue from a hot glue gun.

For Snow Miser’s hair, we used very white paint, and then covered it in silver glitter. It glistened like ice. For Heat Miser’s hair we used pillow stuffing, shaped and glued “up” like Don King’s hair, then painted it red and orange.

The clothing was simple. Red and Blue shirts covered with glitter to make them a bit more shiny. Then the appropriate accessories.

These costumes were a big hit for my kids who are ten year old twins. They both won trophies at our town Halloween Costume Party, and were in the local newspaper. They got tons of compliments from their friends and even strangers when they were trick-or-treating. Now we need to try to top it next year! 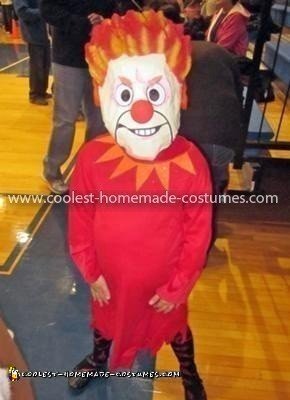 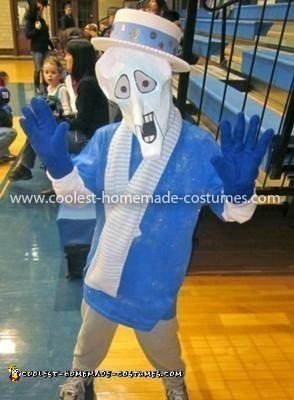