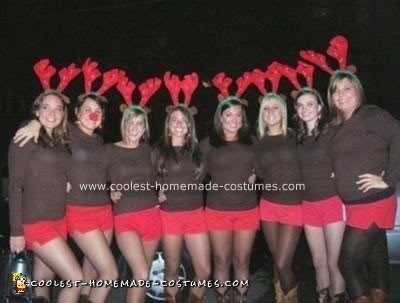 While in college, a group of my sorority sisters and I were all broke and trying to figure out what to be for a Halloween party. My friend Eliza, and I went to the store to look at the costumes in hopes to find some inspiration of something we could mimic. However, most of the Halloween costumes were picked over and the store was actually starting to put out Christmas decorations.

We saw the reindeer antler headbands and the rest of the Homemade Santa’s Reindeer Group Halloween Costume just fell into place after recruiting 7 other girls. We all wore brown fish-net tights, cow boy boots, red running shorts, brown shirts (and we used iron-on letters to put our names on the back- Dasher, Dancer, Prancer, etc.), jingle bell earrings, and the girl who was Rudolf wore a clown nose.

The costume was such a hit people still talk about it!

Grandma Got Run Over by a Reindeer Couple Costume

The Scarves of Christmas Past Costume