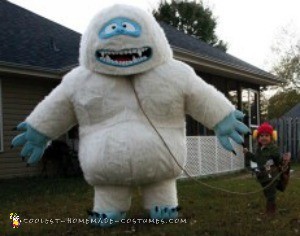 This Halloween my 2 1/2 year old Daughter wanted to be Yukon Cornelius and Me to be Bumble. She has been watching Rudolph the Red Nose Reindeer (1964) since June. She really loves Christmas and everything to do with it. Thus, we needed homemade Christmas costumes.

I decided to make them to the scale of the film. Since my daughter is 33″ tall, Bumble would then be 7′-1″. To start the process we made a clay 1/12 scale version of him out of clay. I then covered that covered in masking tape.  Once the tape was applied I marked out patterns that I would cut off and re-tape to card stock. After this was complete I had them scanned in and enlarged to full scale. Once I had my patterns we purchased L200 3/4″ foam online from foam part in 24 x 48 inch sheets (12) of them. and then purchased the white fur fabric that would eventually cover him – 10 yards.

The hands and feet would be carved out of green upholstery foam and covered with a light blue fleece. We also bought a little bit of red and yellow fleece to make Yukon’s hat and ear muffs. We started the 2nd week of September and worked on it mostly weekend up to Oct 23rd when we completed it.

Reactions to our Homemade Christmas Costumes

So, we had a local fall festival we wanted to attend the weekend prior to Halloween. They day finally came and after a great reception of the costumes on Facebook among family and friends we were ready to take it out in the public. This was the 32nd Jack -O-Lantern Jubilee – held in North Augusta SC.  Estimated 10,000 people were there so you can imagine I stopped often for photos with children and adult alike.

The costume contest was for the children only so we entered my little Yukon and she placed 3rd for her age group. Despite not participating in any local contest, I was was given much praise and my costume’s photo was featured in the metro section of our local news paper.  After such great response I was urged by family to enter some online contest so here I am! I look forward to seeing all the contestants and their creativity and having the opportunity to show mine.