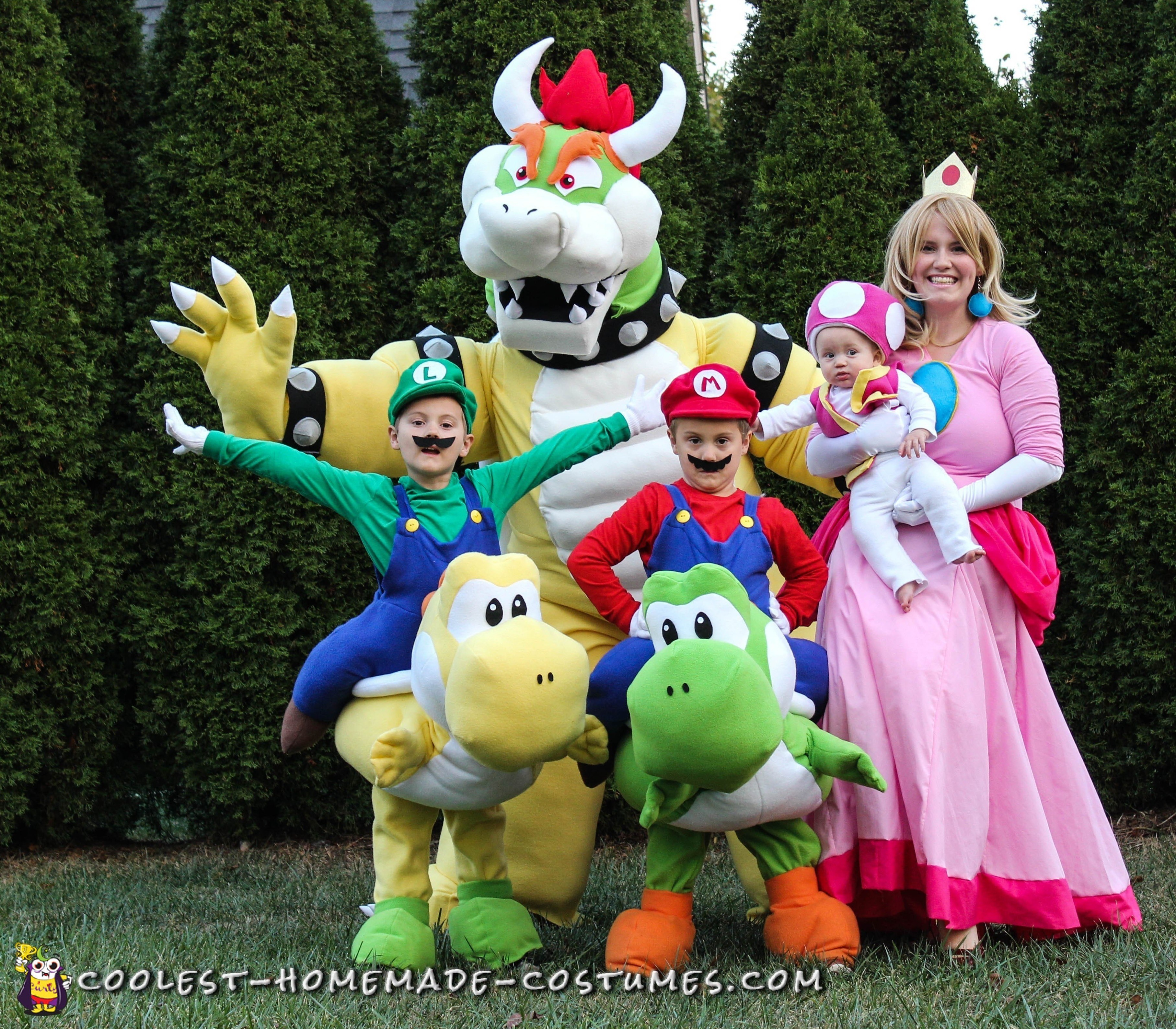 Our 5 year old twin boys adore Mario (it is their favorite game to play with their Dad). So we decided in late August that with our new addition (baby girl born in May) a Mario family costume would be super fun and memorable. As we scoured the internet for inspiration I came across some pictures of a Mario riding Yoshi costume and just couldn’t get over the cuteness so we set out to make some for our boys. My husband took on the daunting task of creating the Bowser costume and I made the 4 other costumes.

Our costumes involve everything from paper-mache to sewing to hot glue and polyfil!

I found a pattern online for a mini yoshi doll and enlarged the pattern to create the Yoshi’s. It took several attempts to get the right proportions. I made them out of fleece and then stuffed them with polyfil. Then we had to figure out a way to Macgyver the head so it would stay up right instead of flopping down (that involved a wooden disc, fishing line, and an old buckle and strap from my college backpack. I knew that would come in handy some day!:)). I attached some overalls I made using a pair of their pants as a pattern and modified an online pattern to create their hats. We purchased t-shirts and gloves for them to wear and cut moustaches from sticky back felt.

I constructed my daughter’s mushroom hat from winter hat pattern and then covered it with a large circular piece of fleece with darts to remove extra fabric. Then I stuffed with polyfil. I was really pleased with how the shape came out. I made her some white pants and a little vest using one of her shirts as a pattern.

The challenge for my costume was to create something I could feed our baby in. So I settled on a skirt and t-shirt combo. Using a pattern from Joann’s I made the skirt and then came up with my own underskirt pattern and attached that. We could not find a t shirt that really came close to matching the fabric we’d picked until just a few hours before we debuted our costumes. I found one in the little girl’s section, purchased the largest size and crossed my fingers it would fit (it did)! My husband made my jewels out of felt and attached them with hot glue. I purchased my wig and gloves. He also made my crown from sparkly cardstock attached to a headband.

The Bowser suit was a labor of love and completely handmade. My husband did most of the work, including making the Bowser head from a baseball cap, paper-mache, hot glue and fabric. I constructed the body suit using a pair of his pants and a shirt as a pattern. I helped with any sewing that was needed. But most of the detail work was done by my husband with fabric, polyfil, and hot glue.

We tried several methods for filling out the bodysuit before landing on embroidery hoops, separated with poster board and covered with fabric and polyfil. It turned out great and allowed for more air circulation. My husband also installed two fans (one in the shell and one in the breast plate) to make wearing the suit more bearable. That was a stroke of genius on his part and helped make wearing the suit more comfortable. Overall it turned out amazing!

Reactions to our Mario Family Costume

We debuted our costumes at a local Halloween parade. We thought people would like the costumes, but I wasn’t quite prepared for the reaction we got. As we walked along the sidewalk trying to find a spot to watch the parade we were stopped every few steps by people wanting a picture. We never ended up finding a spot to watch the parade and basically missed the whole thing! We made it up to our kids with a stop at Sonic for slushies on the way home. They were super good sports about it all.

We went trick or treating in our neighborhood a few days later and got stopped a bunch of times then as well for pictures. All the kids loved my husband’s costume and would come and hug his legs or ask for a high-five it was really sweet. And he had the best time pretending to be Bowser! And we all loved bringing our Mario family costume to life.