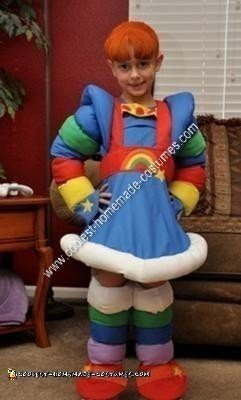 Back in the 80″s Rainbow Brite was a big deal to us girls! My mother made my cousin and I each a homemade Rainbow Brite Halloween costume. Over the years we allowed a few people to borrow it and one year it was never returned. I now have a daughter and wanted her to experience the fun of making a costume. We decided this would be the perfect costume to recreate!

We started out with an old dress pattern that was poorly written. I went and purchased the fabric at Walmart. We did some measuring and got started. My daughter got to help lay out the fabric and cut it. My mother worked night and day sewing and re sewing to get the pieces to match up just right.

Each color on the arms and legs including the white around the bottom of the dress is individually filled with batting. The blue shirt and the arms are all sewn together to make one piece. The dress part is like a jumper that goes on after the shirt. It attaches in the back with a few pieces of velcro. The boots were made same as the arms. Each ring of color is individually stuffed, then sewn together. At the bottom is a long piece that just covers the to of the shoes.

On each hand and each shoe cover is a star that was cut out and stitched around. Same with the rainbow in the center of the dress.

Because of the length of the dress and the way the bottom white ring sticks out, we had to make little bloomers. We just created as oversized undies to cover her real ones.

We drew a star on her cheek with face paint and sprayed her hair orange.

While out trick or treating, all the mothers my age were soooo excited to see this homemade Rainbow Brite Halloween costume. The children however did not know who she was unless they had seen the cartoons.

In all, this costume cost about $100 in fabric and supplies. Because the last time my mom attempted to do anything like this was about 24 years ago.. It took her close to 5 full days to get everything sewn and put together correctly. 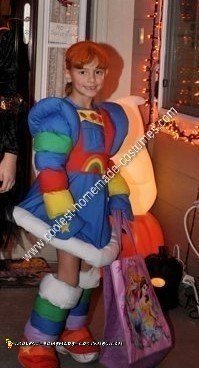