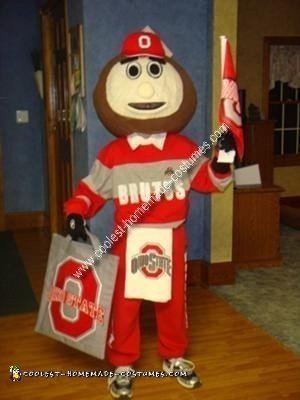 As a family that bleeds Scarlet & Grey, being Buckeye Brutus was what my son wanted for Halloween. So where to begin this Ohio State Buckeye Brutus Mascot Costume?

First, I printed out some pictures of our favorite mascot to use as a guide. Then I purchased red sweats & a plain red baseball hat from goodwill, found the golf towel on eBay and our local Wal-mart had the Ohio State striped rugby shirt. I used one of my favorite craft items, sticky felt in white and cut out “Ohio State Buckeyes”, to put down the legs of the sweat pants. “Brutus” and “0 0” to put on the shirt front and back. “O” for the hat.

Now, the hardest part was the head. I used a kids bouncy balloon (the ones with the large rubber band to hit). Blew it up and tried my hand for the first time at paper mache. I only put on 2 coats, leaving an opening at the bottom for his head to fit, then went away for the weekend intending to put another coat, only to come home and find the balloon popped. OOPs. Oh well. I then used brown and beige felt to cover the paper mache. This was more difficult than I thought. I did not want to use hot glue because you could see the bumps. But regular glue would not stick to the felt. I ended up using a spray adhesive, but had to work quickly and carefully. It was very difficult to cut the brown to go around my uneven oval shape. I had to snip and tuck around the bottom. I rolled and stuffed eyebrows, lower lip and a round nose then attached them with hot glue. I made the eyes from more sticky felt. At first, I wasn’t sure where to put the holes for my son to see. It turned out putting the head on his shoulders that the mouth was just about perfect, so I cut out the entire mouth. But then the head wouldn’t sit straight. I found the perfect fix. I purchased a witch’s hat that had a wire brim. We put it in the head with some stuffing above it. Then my son put his head in the witches hat and the Brutus head stayed still.

His grandmother quilted an Ohio State bag for all his goodies. My son then put on his football receiver’s gloves and we were ready to go. The only issue was he could not look down, so using stairs or in a crowd he needed a little help from a guide, but otherwise we were very pleased. 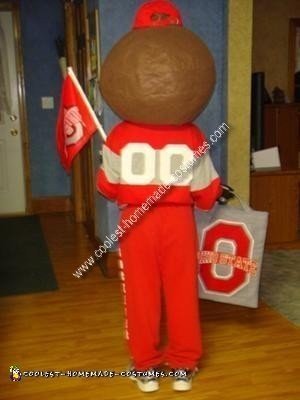 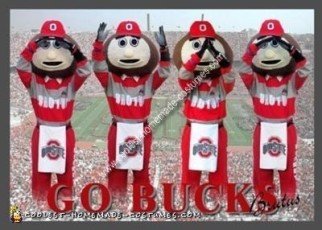 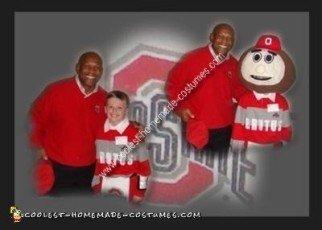