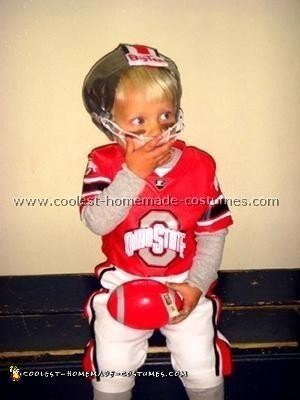 We are huge Ohio State Buckeye football fans. My son who turned two in October, would recognize anything Buckeyes and gets all excited and says “oohh guckeyes!” which was his way of saying “Go Buckeyes!” So he just had to be a Buckeye! He had the jersey and since the back of it was blank I used fabric paint to put his last name and a big number 2 on the back.

The shoulder pads were a challenge I hadn’t figured out yet when about a week before Halloween one of my other kids got sick and had to have IV fluids in the hospital. (She is fine, just got dehydrated from a stomach bug.) The little padded boards they used to hold her arm flat were perfect. Two big ones front and back and two little ones over the shoulders all held together with safety pins. For the pants I bought a pair of white pants in size 6 months (he has a small waist and with the elastic they fit perfect for football pants) at the thrift store for .25 cents. I used hot glue to add the stripes with strips of black and red felt. I studied pictures of actual players to get everything as accurate as possible.

The helmet turned out to be a time zapping challenge. First I spent a lot of time in stores and on the internet looking for something that would be realistic and wouldn’t cost a fortune. Not to mention it had to be rather small and look like a buckeye helmet. Once I realized I was going to have to make one I decided maybe I could pull one off with paper Mache and started looking for something round I could use as a mold. That’s when I came up with the idea of using a silver ball my kids had that was losing air anyway. I cut it in the shape of a helmet and I made a paper Mache insert to help it keep its shape. Then I glued the appropriate stripes on one piece of felt that I glued to the helmet. I stenciled “Big Ten” and “Riddell” with a red marker on pieces of felt and added to the front and back of the stripes. I drew little buckeye leafs on blank address labels and cut them out in circles and glued them to the helmet because the sticky didn’t work to well on the rubber. I took several white pipe cleaners and twisted until I had the face mask then I hot glued some clear 3m hooks on each side to attach the face mask to.

It was a little cold so some gray long johns a few sizes to big (which I had) worked great at keeping him warm and buffing him up a little. His sister’s soccer cleats worked great too. They were a little big but they didn’t slow him down any. And of course he had to have the black smudges under his eyes. We taught him to say “Beat Michigan” (in case you don’t know Ohio State and Michigan have one of the biggest rivalries in all of football) which came out “Eat Ichbigan!” He was just too cute and a hit everywhere we went. Go Bucks!