This Homemade Jeff Gordon Costume was created for my son Kalyb (in photos) as a last minute costume for trick-or-treating because he was absolutely dying to go and we couldn’t afford to buy him the costume he really wanted. So I kept reassuring him that I would come up with a costume for him one way or the other and when he came to me all worried about his friend’s questioning him what he was gonna bethis year for Halloween I just told him to tell them it was a secret. Well he just ate that right up and put full faith and trust in me to take care of his costume.

The idea stemmed from a blow up suspender type of John Deere tractor costume we had bought him quite a few years ago and as we trick or treated we played The Big Green Tractor country song and he was the talk of the town and almost everyone gave him extra goodies and took pictures!! So having a creative knack (due to lots of great cheap birthday parties because we don’t have money trees planted out in our yard…lol!), and my previous experience and building other themed things with cardboard, I got my idea for Kalyb’s costume. Now let me inform you of how this was created and the time frame in which it was created as well (and to this day I still don’t have a clue how I pulled it off so well). So time is running out and before I know it I’m sending my son off to school on the day of trick or treat night and still no costume. After the bus pulled away I went into the garage and started to rummage. After finding larger sturdy boxes, a bunch of all different kinds of heavy duty tapes, and rack full of spray paint in dire need of use (in just the right colors too), it dawned on me ……I’m gonna build me a cardboard racecar! So, after eight hours of cutting, taping, gluing, and constantly looking at my reference picture of Jeff Gordon’s car, VOILA~!

Then came the question of how’s he supposed to wear this, so as the “car” dried in the driveway I went back to rummaging the garage and found 2 bungee straps, perfect! I had about 5 minutes till kiddo got home, and I really wanted to surprise him with it, so I quickly propped a tarp over it & anxiuosly waited for the bus to unveil my masterpiece. He couldn’t wait to see it when he got off the bus, but I told him we had to wait for the bus to be out of sight so no one would get a peek! The look on his face was priceless!! We then just simply had him wear blue “slippy” pants (as we call them, I’m not sure what they’re really called) and his Jeff Gordon windbreaker he got that Easter as a gift and called it his “racing suit”. He was more than the talk of the town with this costume. We had attracted a small gathering to “race” around town with us that night! What a blast it was!! I hope everyone else enjoys these photos and I don’t have anything but these two photos because the whole entire costume was constructed in 6 hours.

I know we don’t meet all the criteria for winning but that $2500 would save our house, Kalyb & I decided to try this. Thanks! Enjoy the creativity! 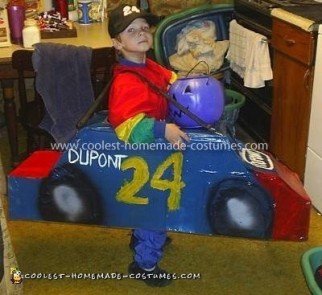