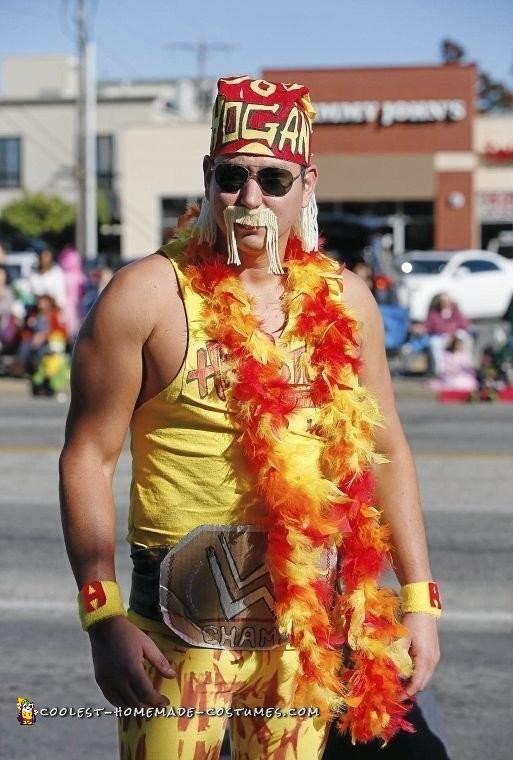 I made this Hulk Hogan costume last minute, the day of Halloween! My boyfriend couldnt decide what to be and then he finally picked something: Hulk Hogan. At first I thought it was a silly idea, but thenI started Googling photos and found out that I could really go crazy and have some fun making it, so I got to work! the whole thing took me about 2 hours. It was really simple, and I think just about anyone who is crafty can make it!

OMG the reactions he got were incredible! We first took his daughter to a parade and had a hard time getting through crowds because people were literally lining up to take photos with him! His 5 year old daughter was not happy about strangers trying to steal her daddy. There were so many parents trying to convince their kids to take photos with him, just so they could have a photo with him lol. Then even a reporter took his photo – he was front page on the news paper the next day!

Later that night we went to an adult party to enter a costume contest. He didn’t win but he was definitely a crowd favorite there too! It was awesome! I think he had to say “hey brother” like 1,000 times haha. when the winners of the costume contest were announced and he didn’t win, someone in the crowd even yelled “Hogan got robbed” so he yelled back “I want a re-match”! haha, it was so much fun. Seems like every adult male got excited to see him!

This Hulk Hogan costume is Super Easy to Make

I used two yellow T-shirts, cut one up and wrote the lettering on it for the “Hogan” on his shirt with sharpies and sewed it on to the other yellow T-Shirt. I then cut the sleeves and neck – boom, shirt is done.

I used a yellow bandana and glued red flames on it made from felt, then glued yellow felt letters that say Hogan on top of the flames and outlined those with a black sharpie to stand out more.

The pants are yellow leggings, cut to be shorter. I did this since I made it last minute and I didn’t have time to tie dye the pants so I bundled/rubberbanded them just like you would if you were going to tie dye and then instead of dying them. I spray painted them with red spray paint! Tast and easy!

I found at a local craft store the red and yellow boa for the costume.

The hair/beard are made out of yellow yarn. I glued strips of yellow yarn to a wig cap to make the hair (the bandana covers the rest of your head) and then I used a peice of felt and glued yarn in the shape of a mustache to make the beard (then used double sided sticky tape to stick it to his face) WAY cheaper then buying a wig and beard!

I made the belt from cardboard. I used silver/black/red sharpies to make the design. Then you can make the around the waste part out of duct tape.

Then for the wrist bands I just bought plain yellow ones and glued red H’s made out of felt to them.

Boots, I’m so sorry I somehow don’t have a picture of the boots. But I basically covered old tennis shoes in yellow duct tape, the made sheets of duct tape to go mid way up the calf. I then taped it to the shoes and cut slits down the front and poked hole on each side to add laces!

You can Google or look on Pinterest to get a better idea of what they look like – duct tape costume boots. 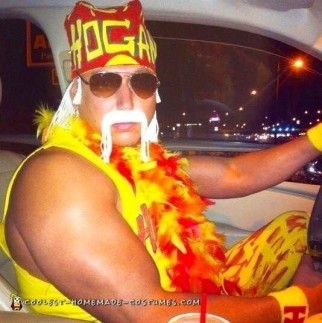 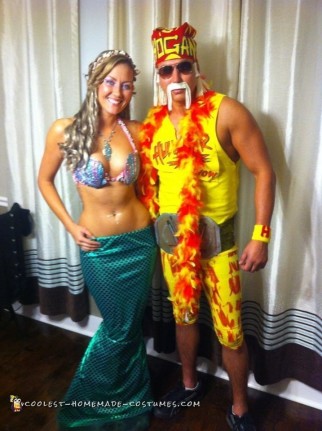 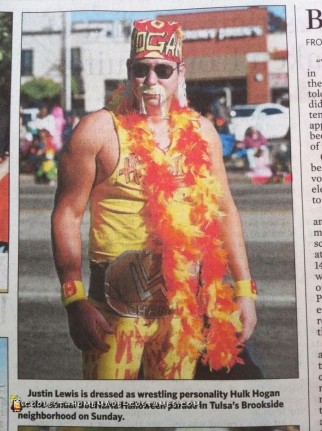