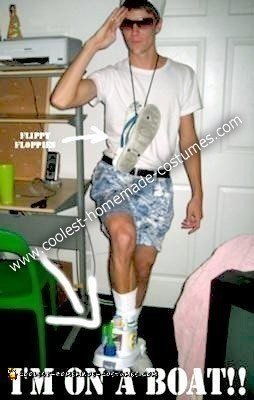 So as Halloween approached I decided I wanted to do something everyone would recognize and yet would still be original and funny. After dressing up as Will Ferrel from the Cowbell Sketch from SNL I decided I loved to be costumes that had a song to go along with it. So, this year I decided to dress up similar to the famous Lonely Island ft. T-Paine song: “I’m on a Boat”. Now originally I was going to dress up like they were in the music video, but that wouldn’t have been that recognizable.

As a result, I decided to have a sailor hat, some short funny shorts, a white T-shirt (which on the back says: “I’m on a Boat”, and an actual boat. I would literally be on a BOAT. So I went and got a toy boat, cut out the back and tied it around my shoe. Then I decided to add the flippy floppies which were just some sandals tied around my neck with a shoe lace.

Needless to say the Homemade “I’m on a Boat” by T-Pain Costume was a hit and I got lots of attention, especially when they played the song at a part I was at!