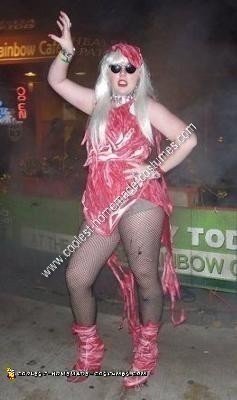 My costume is a re-creation of Lady GaGa’s infamous Meat Dress that she wore on the 2010 VMA’s. I clearly couldn’t use real meat because people would be slightly angry at me and I don’t have enough money to cover myself in beef. So I decided to create my own GaGa costume with a slightly more manageable medium – fabric and paint. It took me around 2 weeks to make, from start to finish.

I purchased a bodysuit and some red fabric and looked endlessly at pictures of how GaGa’s was draped. I then bought some red fabric and cut it into the shape of her costume. After I had all of the fabric draped and glued (I can’t sew), I began to paint on the “meat” design. I used a combo of red and white fabric paint to create the meaty pattern, and then when I was finished, I added strips of white fabric to look like the fatty parts of meat. I then had to create the headpiece and shoe pieces the same way, eventually attaching the shoe pieces to my heels with actual butcher twine.

Then I moved on to her jewelry. She had massive sparkly jewels on at the show, so I purchased some big rhinestones and glued them onto a strip of fabric, which attached around my neck with velcro. This costume took a ton of time to create and a lot of money to make. I also had made a wig similar to GaGa’s with the light blue at the bottom, but it kept falling in my face, so I had to use a different wig.

I think homemade GaGa costumes are the best type to make because it’s almost impossible to find good versions of what she wears from a store. 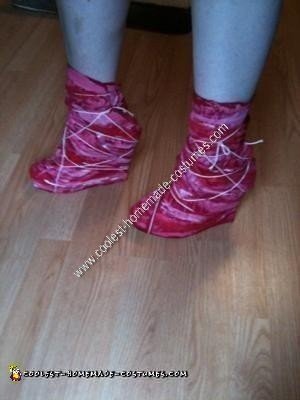 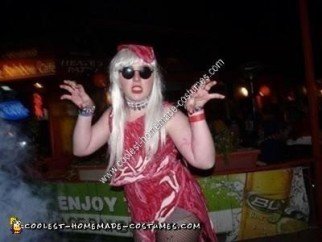 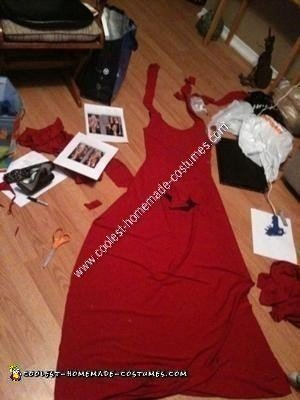