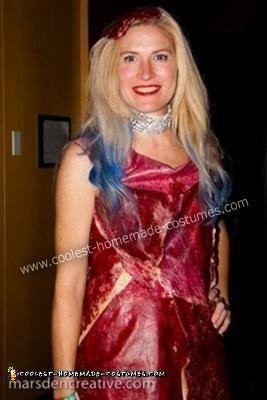 This Lady Gaga Meat Dress Costume was the best and most fun costume ever. It took me a long time to make but was well worth it. The inspiration was clearly from the media and Lady Gaga’s unparalleled fame and crazy getups. There were several other Lady Gaga’s at this party, but only one meat dress.

First, I made a simple dress out of muslin complete with zipper and sprayed it with red clothing spray paint. Then I took more muslin and cut them into pieces in the shapes of the meat Lady Gaga had on her dress, mapping them out as I went. I had 3-4 photos of Lady Gaga from the Grammy’s that I referred to throughout the process. I then painted and/or dipped the ‘meat’ pieces in liquid latex which I bought from my local art supply store, Blick! This gave it the texture, sheen and feel of meat. I hung all the pieces in the basement of my apartment building for a day or so to dry.

When the ‘meat’ was dried I took different shades of red and painted the pieces to look like the meat. Occasionally I would add more latex or white paint to try and get the look of fat and sinew on the ‘meat’. The next step was sewing it all together and getting the accessories together.

One concern was how to make the slab of ‘meat’ for my head. One night after a chicken dinner from the grocery store, I got the idea… the plastic tray from the chicken! I had to get a new bottle of latex, as it goes quick, and I dumped ½ of it in the chicken tray. It took about 3-4 days to dry but when it did it was perfect, so I trimmed it a bit and painted it red.

The night before the party I had a friend come over and put ‘rhinestones’ on a muslin choker I made, it must have taken her about 2 hours and several glue gun sticks, but it looked amazing.

To assemble the dress, I worked piece by piece sewing the meat pieces onto the dress, trying it on periodically to make sure it fit properly and that I could get in the following night. I left several pieces half-attached so that I could get in and close it up before the party. Hand sewing got pretty difficult and tedious so at some point I lost my patience and started stapling the ‘meat’ to the dress. That proved to be MUCH faster.

The night of the party I had a friend come over and, using special costume spray, she spray painted my hair light blonde and blue at the tips. I then took an old pair of platform espadrille shoes, more muslin sprayed red and some cooking twine to make the platform meat shoes. I stapled the muslin at the bottom of the shoe, loosely wrapping it around my shoes, feet, and ankles and tied it all off with the twine. I attached the ‘meat’ head-piece, slipped on the dress, stapled the final pieces together and voila, I was done!

This Lady Gaga Meat Dress Costume was a great hit at the party. I still have the dress in my closet and I don’t think I’m ever going to be able to top that costume.