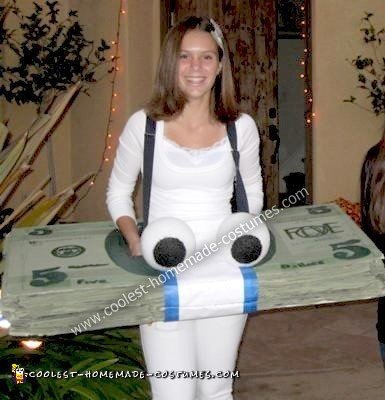 We originally got the idea for a Homemade Geico Money Costume because the Geico money was an add in a Halloween costume catalog and we thought it was a really cute idea. We played with a ton of ideas on how to make it, but eventually found that this was the best way:

We bought two Styrofoam balls and painted black circles on them to be eyes. We let them dry while we worked on the rest of it. We took four pizza boxes and duct taped two of them together horizontally. We then did the same with the other two.

Then we took newspapers and accordion folded them.
We took the accordion folded newspaper and used it to fill in the inch overhang between the poster boards and the pizza boxes. This gave it the paper effect that I think makes my Geico costume better than any other.

We took a basic non metallic green spray paint and covered the entire costume. Then we cut out a hole big enough for my waist in the center of it (be sure to leave enough room in front of the hole for the eyes to go on. We looked at a five dollar bill and then used a darker green paint to paint on what it looked like.

Then we took enough white printer paper to wrap around the costume and taped them together vertically. We took blue duct tape and lined the sides of the paper with it. That made the money strap and we wrapped it around the costume. Then we sanded down the bottoms of the eyes so they had a flat edge and glued them in front of the body hole.

To keep the costume on me with my hands free we took a pair of suspenders and hooked them onto the inside of the body hole. As an extra effect we played the song “who’s watching me” on my iPod while we trick or treated and I wore a five dollar bill into a bow in my hair

This Homemade Geico Money Costume was a inexpensive costume (only $18 because we used mostly recycled items) and we got a lot of compliments on it!