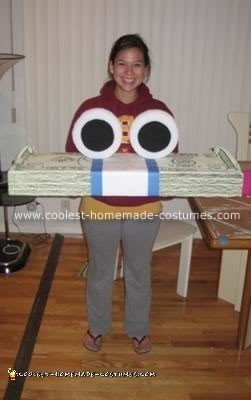 Super easy and fun to make, this Homemade Geico Cash Costume is definitely for people of all ages. And since we’ve all seen the Geico Cash commercials by now (and probably still have that song stuck in our heads), this quick and inexpensive costume will be a hit at any Halloween party.

I started out with simple foam insulation found for less than $10 at a local hardware store. I cut out four pieces to my dimensions and started gluing (rookie mistake: don’t use a hot glue gun for this). I used carpenter’s glue to hold the pieces of foam together and it worked great.

After the pieces were set, I applied a coat of greenish paint to give the foam that money color then drew on the lines to really give it the look of a stack of cash.

I wanted to make this costume as realistic as I could, so I cut out three sheets of butcher paper and used those as my top three dollar bills. For the top bill, I spent about an hour trying to duplicate a real $5 bill. As you can tell, I added my own president, though. When the sheets were dry, I glued them all together with a glue stick then to the foam with carpenter’s glue. Make sure you curl up the edges.

The eyes were the easiest part. I used a block of foam and cut out circles, then glued on black felt to complete the eyes. I stuck the eyes into the foam with wood dowels to make sure they wouldn’t come off easily.

Once the costume was all put together, I added loops of felt in the back so I could wear the costume attached to a belt. And since it’s so light, it wasn’t a problem. I also have small speakers behind the eyes hooked up to my iPod playing the song that goes along with these commercials.

I spent maybe $20 on the whole thing, and spent two evenings putting it together. It turned out to be one of my favorite homemade costumes yet! 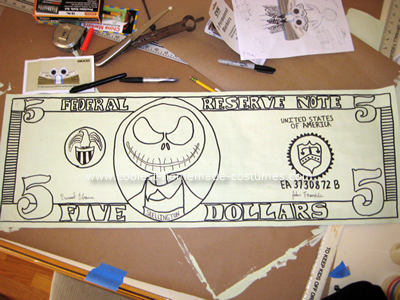 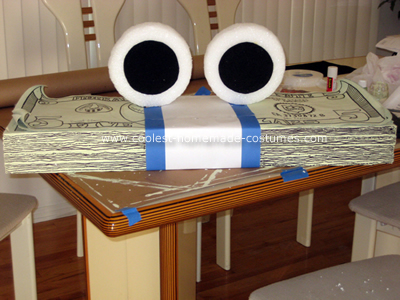