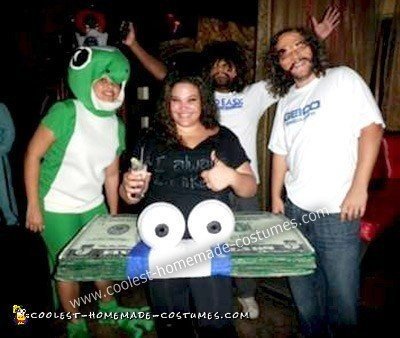 While the rest of my team did purchase their costumes, I have a firm policy of never buying Halloween costumes and this year made myself a Geico costume.

I used about 20 boxes; I flattened them out, cut a hole in the middle that I could fit into but, at the same time, was small enough to sit snugly on my hips and stuck them all together. I then printed a large $5 bill, consisting of several sheets of paper, and stuck it to the top of my money stack. I painted the edges of the box stack green, so it would look like money.

I used a drill to make holes where the eyes should be and used two Styrofoam buoys for the eyes. I used two wooden skewers and hot glue to fasten the eyes to the stack. I also made a T-shirt to wear with it that had “I always feel like…” on the front, and “somebody’s watching me” on the back, as a tribute to the song used in the commercial.

It was hard navigating around crowded parties and bars for Halloween, but well worth it. I had a ton of fun and competed in three different costume contests, winning all three, including an additional prize for most creative costume!