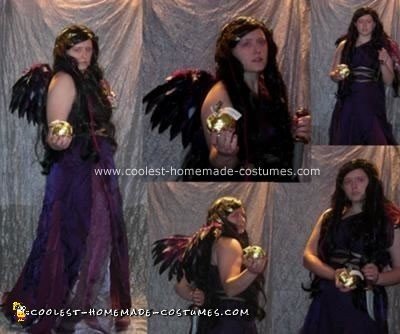 Eris is the Greek goddess of chaos, conflict, and strife. She is a natural-born troublemaker. When all the other gods and goddesses were invited to a wedding except Eris, she showed up anyway and threw the golden Apple of Discord into the wedding party, with a label that read, “For the Fairest.” Three goddesses stepped up to claim the title of “Fairest”: Athena, Aphrodite, and Hera. When they could not agree on who should get the apple, Zeus appointed prince Paris of Troy (a mortal) to be the judge. All three goddesses attempted to bribe Paris– Athena offered him wealth, Hera offered him power, but Aphrodite offered him the love of the most beautiful woman in the world. Paris chose Aphrodite, and she caused Helen, the most beautiful woman in the world, to fall in love with him. Unfortunately, Helen was already married to the king of Sparta– so when Paris stole her away, it began the Trojan war!

Besides carrying the Apple of Discord, Eris was described in classical literature as having torn robes, wings, and a dagger. To complete this Homemade Eris Greek Goddess Costume, I sewed a one-shouldered toga-like dress with six layers of fabric in various shades of lavender, purple, and red. I cut the hemline into jagged strips in a random manner, so that as I walked the different colors of fabric would peek out. I finished the edges on my serger (a specialized kind of sewing machine, also called an over lock machine) so they would not come unraveled. The belt with its crisscrossing trim appears to be part of the dress, but it is actually a separate piece, and is used to gather the layers of flowing fabric under the bust.

I created the wings myself by making a frame of thick wire, then covering it with stiff fabric and hot-gluing loose feathers in various sizes to the fabric. Before gluing, I cut each feather so the edges would be pointy rather than rounded, to make the wings look especially mean and nasty.

The laurel leaves in my hair are made of thin embossing brass that I cut with scissors into the shape of leaves, and hammered with a straight edge and a ball peen hammer to give the leaves veins. Then I wired them together into a wreath for my head. I also modified a boring plain black wig by sewing in chunks of colored embroidery floss, to give the hair chaotic streaks of purple and red.

The dagger was originally a cheap plastic Halloween dagger from the store, but I spray-painted the handle gold, wrapped purple fabric around it, and glued a large glass gem to the butt of the handle.

The apple also came from the store, but of course I added the tag that reads, “For the Fairest” as the finishing touch.