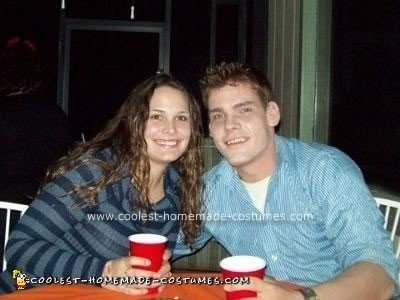 I like to make my costumes so last year that’s what I did. We both read the Twilight Saga and loved the books, plus they were getting pretty big so I figured why not be Edward Cullen and Bella Swan, it would be pretty easy and cheap to do.

So when Halloween arrived we applied mounds of pale make up to ourselves. He got a pair of contacts to match Edward’s eyes, closest clothes to what Edward might wear, as well as fangs (so people would know he was a vampire). I had a long sleeve shirt, no make-up and glued a fake vampire bite to my hand.

We were the only Bella and Edward at the party but the movie had not come out yet so sadly a lot of people didn’t realize who we were supposed to be until we told them. It by far was one of my favorite costumes ever and definitely the coolest one.