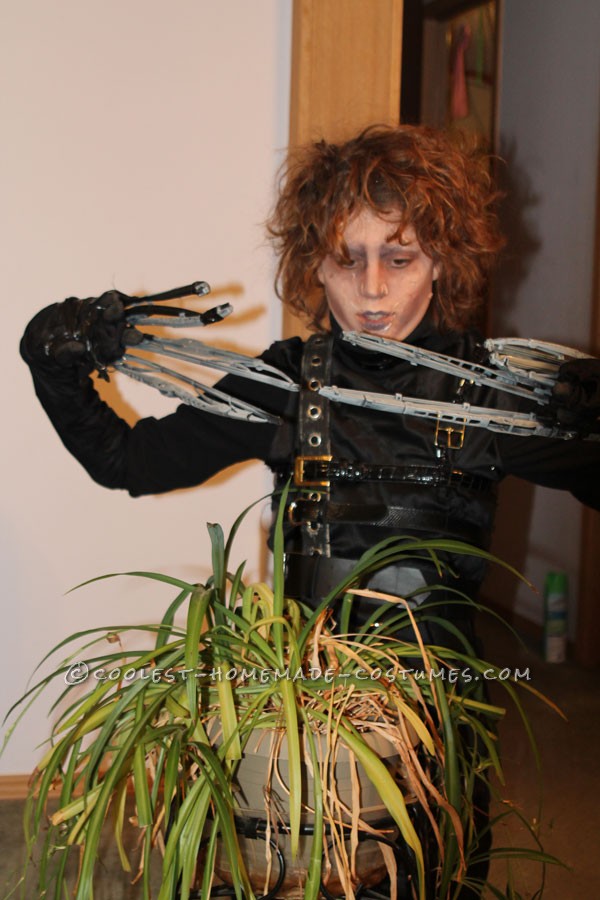 I wanted to create a unique costume that people could instantly recognize, I wanted to be seen as the character I was portraying, and not be mistaken for anyone else – I thought having scissors for hands would be the best option. I had nearly all the supplies for the costume on hand, so with only a moderate amount of effort I created this Edward Scissorhands Costume.  This is one of my favorite costume creations, it was a hit everywhere, even with the young kids who couldn’t understand why I wasn’t Wolverine. 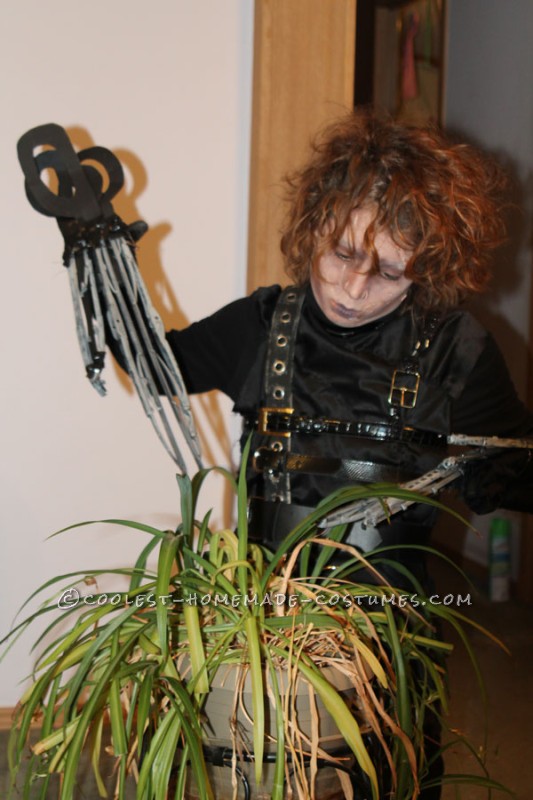 The top is a cotton/ spandex blend turtle neck with remnant fabric from my stash whipstiched by hand to the front with polyester thread. I made belt-loops from nylon upholstery thread to keep my belts from sliding around and slipping and falling down. I purchased 5 of the belts worn with the costume from goodwill.
The pants I’m wearing were purchased from goodwill, they are a polyester spandex blend so they have a leather-like sheen but are way more comfortable than pvc or other fake-leather pants. I chose these pants because I can easily alter them by sewing the fabric by machine. I added elastic at the bottom making them stirrup pants to they do not get bunched up at the top of boots.
The boots are boots I’ve had since I was 12- I loved these boots- I’m sure I wore them often, but they have since fallen into decay –  luckily, I kept these boots which are now the perfect Edward Scissorhands boots 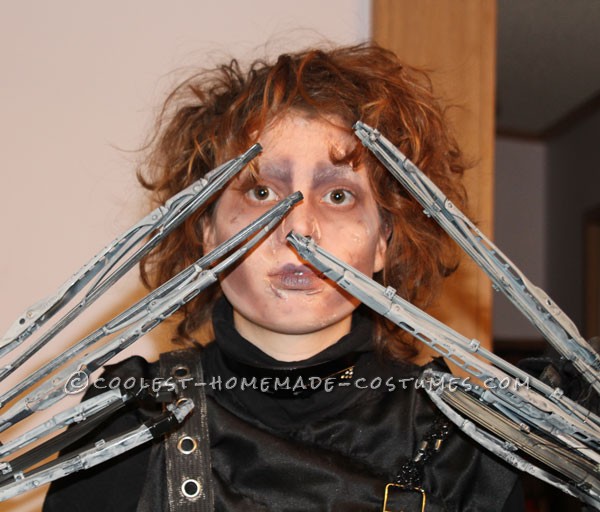 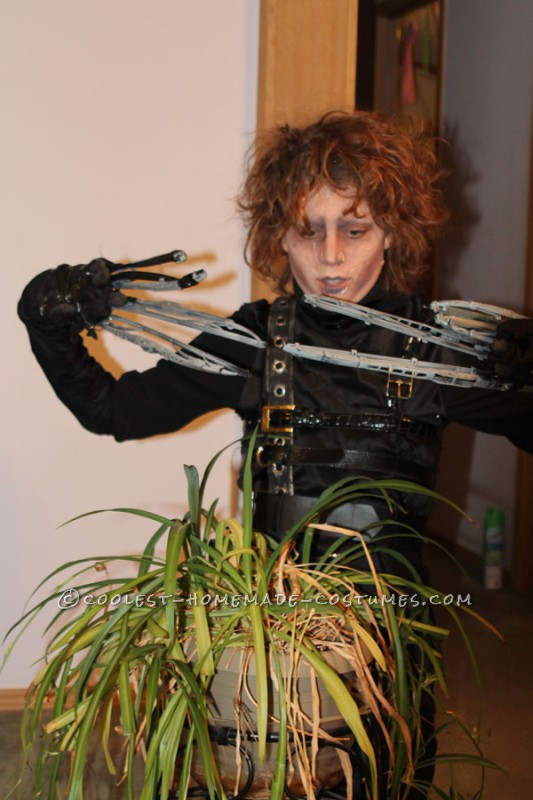 For the makeup I found Kandee Johnson and Emma Pickles YouTube tutorials the most helpful.
The look in these photos was created using a mix of white and dark brown costume face paint as the base and a mix of light to light-tan pressed powder and a variety of eyeshadows for the finished look. I used the glue stick method on my eyebrows.

For the scars I used Elmer’s washable school glue and tissues. When you have Elmer’s glue dried on your face talking feels weird, but that makes it easier to stay in character :)

For the hair: My hair holds natural curl with a little help from mousse or gel. I sometimes pincurl my hair for fun, so if it already has product in it and has been pin-curled I feel no need to tease my hair like crazy. I just fluff it up a little with a bristle-brush or my hands and pin it in clumps all over my head with the ends sticking out 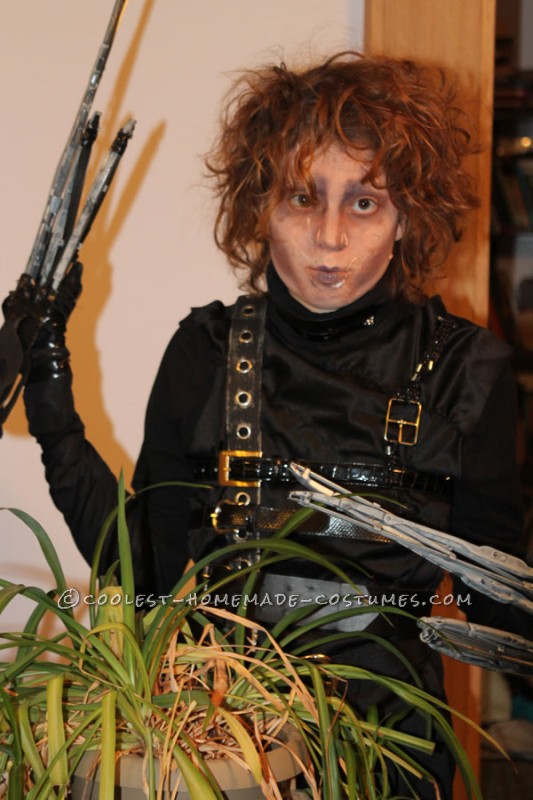 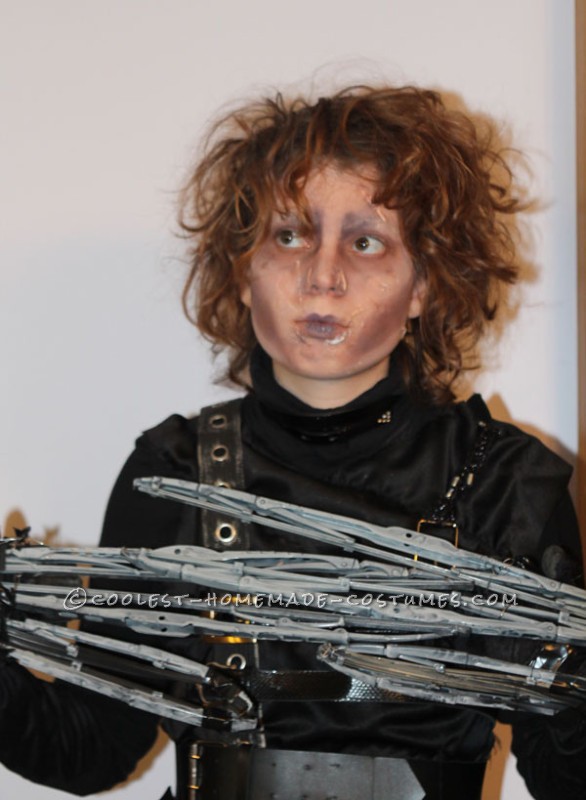 Dressing Up and Going Out

I dressed as Edward to attend a local Halloween parade on Tuesday, and my church’s Trunk or Treat on Thursday. I appreciated the reactions to my costume so much – everyone (except some young kids) knew who I was.

Tuesday parade: I walked around at the parade and everyone knew I was Edward Scissorhands, except a young kid who couldn’t understand why I wasn’t Wolverine. I had a fan club from the Rite Aid to the Sheetz, a few people even took pictures of me (with my consent). My favorite compliments were the people that loved my idea of windshield wipers blades for hands, and the people who didn’t recognize me until I said something.

At both events I wore this costume to there were a couple people who said I looked just like him, parents were informing their toddlers that I was Edward Scissorhands, I would get the occasional nod of approval and “nice costume” from passers-by.

I got very similar reactions at Trunk or Treat, but it was raining so I didn’t have anyone take pictures of me at the event. I thought it was hilarious when one of the kids didn’t know the movie, so I told him I was Edward Scissorhands, and it’s a 1990 movie with Johnny Depp in it. I saw him later with his cousin who also didn’t know Edward Scissorhands, he informed his cousin that I was a character from “A really old movie”. Maybe I’ll be Charlie Chaplin next time… 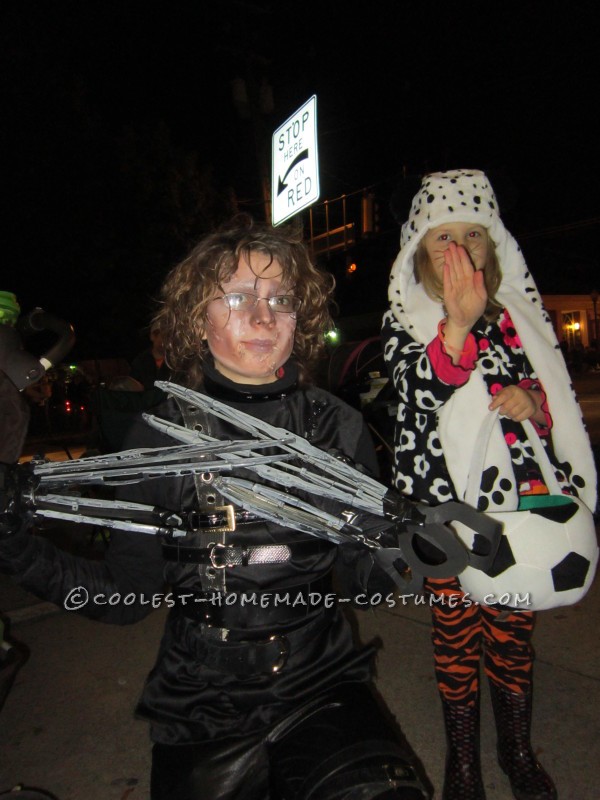 With my little cousin at the parade