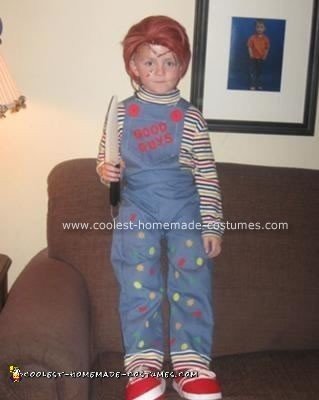 I have two boys and last year my oldest was Chucky, so of course this year his five year old brother wanted to be just like his big brother! I found everything I needed for this Homemade Chucky from Childs Play Halloween Costume at thrift stores, if I did not already have it at home. Even the fabric for the overalls, I found at a thrift store.

I am not a seamstress, but I did manage to put this outfit together. For the shoes, he had a pair of crocs that I knew would be too small for him next year anyway, so I decided to “build” Chucky’s shoes over the crocs. It made them so easy to put on and take off and looked just like Chuckys shoes, other than just going out and buying a red pair of Converse.

For his scars, I used a hot glue gun and made “glue strips” on a piece of wax paper. For the ones that have staples, daddy just cut the sharp part off of the staples and we used rubber cement over the dried hot glue strips and dropped the flat staple on top. Once it dried, we used crayons (red and maroon). We melted the crayons and used the wax to make them look bloody. He was a real hit!

I worried that people wouldn’t know who he was, but everyone sure did. I just used tempra paint and stenciled different shapes on the overalls to try to match as close as possible to Chuckys overalls.