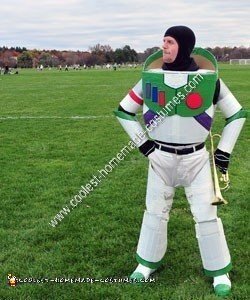 This is my Homemade Buzz Lightyear Costume. Every year in the Umass Minuteman Marching band we have an event called Bandoween where we have band rehearsal in costume. A couple years ago I made a Mechwarrior Madcat costume (can be seen on youtube) and was the Brawny paper towel man before that. This year I decided to go all out.

The costume is made of various cardboard boxed cut to look like buzz and tailored to fit me. The cardboard was laminated in duct and athletic tape. A black marker around the edges really highlighted everything. The cap was a winter hat (I know it isn’t purple) and the upper arms were simply Quaker Oatmeal boxes. The legs were taped directly to my pants to get a good secure fit. The boots were free work taped over.

The costume was a huge hit at the hockey game. Everyone wanted their picture taken with me. Especially all the Jessie’s. 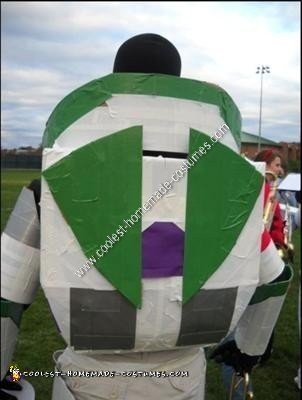