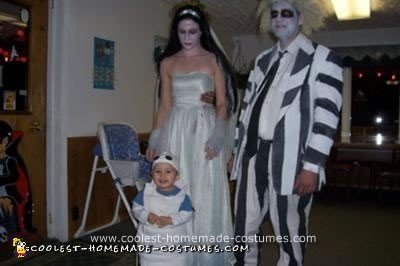 This Beetlejuice Costume was an easy costume to make. We first found a white suit from a second hand store. That was probably the hardest part, as white must not be a popular colour suit to get rid of. Than taped stripes on it, I don’t remember what kind of tape we used, but something that pulls off of fabric but doesn’t leak paint. Some sort of packaging tape or that red tuck tape would work.

We than spray painted the up taped striped black. It took a few coats. Once the paint was dry we removed the tape. He stuffed the belly of a larger sized white button up shirt. We found the shirt and tie at second hand stores. His wig was bought at Walmart. I cut it up so that it was choppy and back comped it and used hair spray so that it was messed up and stood strait u pas much as possible. He made sure to have a bit of a five o-clock shadow, and painted his face white. We used lots of black around the eyes.

And that was it. 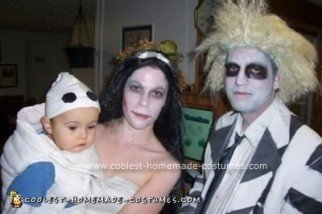