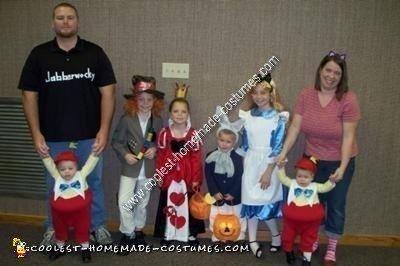 We have twin boys, so in thinking what they could be for Halloween, we thought Tweedle Dee and Tweedle Dum! That started the whole family thinking and everyone started picking who they wanted to be from the Alice in Wonderland movies.

My oldest girl (10) wanted to be Alice. I found a pattern I really liked and made her dress and apron according to the pattern. A blond wig, black ribbon, tights and black shoes finished off the look.

My 7 year old really wanted to be the Mad Hatter, but the Johnny Depp version, cause, you have to admit, he’s just cool!! So the hat we bought, but the rest of the costume we put together by buying a jacket at Goodwill and adding patches, putting on pants that were too small for him, different socks and untied shoes. I even made a sash for him that had ‘thread’ on it, like Johnny Depp wears in the movie.

My next daughter (6) LOVES red, so she was happy to be the Queen of Hearts. Her dress, too, is made from a pattern. Her crown is made from poster board I painted gold and added trim from the dress and felt hearts. We purposely made it small to make her head look bigger. Her wand is a wooden dowel we painted and added some pipe cleaners to and tied off with ribbon (I put the pipe cleaners through a 4-hole button and then glued the button to the dowel and tied it down with the ribbon–it never budged!).

Next was the 3 year-old, he picked the White Rabbit. His ears and tail were bought, but I couldn’t find white sweat pants!!! So I made a pair out of a white towel! (pants are an easy pattern to follow, if you’re new to sewing, start with pants!!). I hand stitched the tail to the pants. We found a blue jacket at Goodwill and added a gold chain and a ‘clock’ to the chain. (we made the clock by painting some cardboard gold and writing numbers on with a permanent marker.) To top off the old English look he wore a white shirt with a collar that we folded up and added a scarf for a bow tie. He loved bouncing around like a rabbit!

Last are the twins, (age 1) the Tweedles. I didn’t have a pattern so I made my own with much trial and error. I worked with one costume until I had the suit perfected and then the second costume was much easier. To make them look ‘fat’ I cut a pool noodle in half, put a wire hanger through the hole to keep it round and connected the hanger to itself in the back. When I made the suit I added loops to the inside to put the noodle through and keep it in place.

Their hats were made out of felt by following a online tutorial on how to make baseball hats. I just made the brim a little smaller to make it look like a beanie. I added the flag at the top by cutting out felt shapes and gluing them on pipe cleaners (before gluing, I threaded the pipe cleaner though a red pony bead, then the top of the hat, then a 2 hole button and then back up through the button, hat, bead. Then I added enough glue to add stability and the flag always stood straight up.)

As parents, we don’t dress up too much, we’re usually chasing kids!! But we thought we’d join in the fun a little. I put “Jabberwocky” on a black shirt of my husband’s with white decorative tape (he is the ‘monster’ in our house, after all!).

I found pink striped socks and made my own cat ears so I could pass as the Cheshire Cat. I made the ears by cutting out ear shapes double on pink felt, coloring in the extra purple with a purple permanent marker and gluing the felt onto a head band (you can’t see it in the picture, but there are purple stripes on the back of the ears).

I know we mixed up characters from both movies, but we did what worked for us. Everyone at the party raved about our homemade Alice in Wonderland theme group costumes, but we really enjoyed just doing something together as a family! 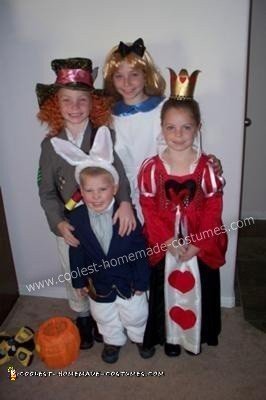 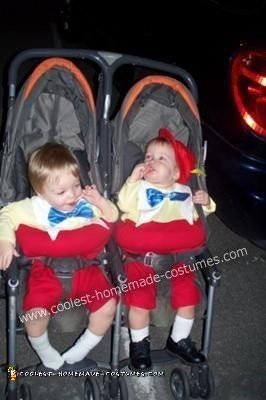