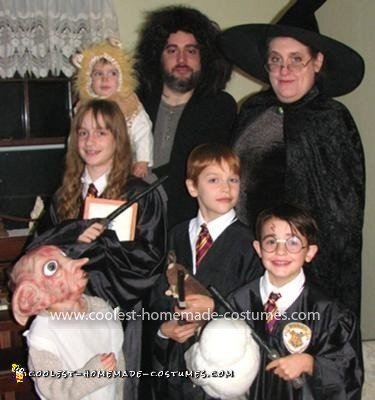 Last year we went as ‘The Wizard of Oz’, so we went with another fantasy novel this year – ‘Harry Potter and the Chamber of Secrets’.

We used graduation gowns from a thrift store for the kids – I duct taped ‘hemmed’ them, and found white collared shirts in our closet. We did dye Harry and Ron’s hair, and purchased McGonagall’s cape and hat off a clearance rack. The Hogwarts badges we printed and laminated from a graphic I found on-line, then fastened to their robes. Crookshank’s hooded vest was a 50-cent garage sale cast-off. We masking taped Ron’s wand to look broken, and ripped open the top and sides of a pillowcase for Dobby’s costume, tying knots at the corners. The mask was the only big purchase – from eBay. Believe it or not, Menards had wands and Potter glasses on clearance for a few dollars.

Hagrid was the hardest – my poor husband got stuck in my oversized (men’s) dress coat that was too small for him. He had a dinge-colored thermal shirt and brought home his old work boots. But the wig – heavens. It was a rock-star wig that I had to give a major haircut and frizz up by brushing until it was thick and full.

But everyone loved seeing our Homemade Harry Potter Family Costume. And I don’t think it turned out too badly, considering how podged together and cheaply we did it. 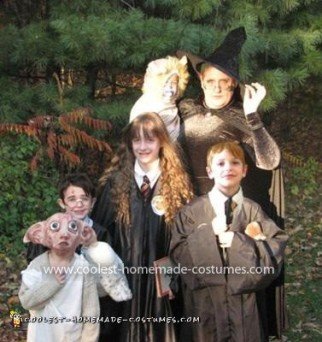 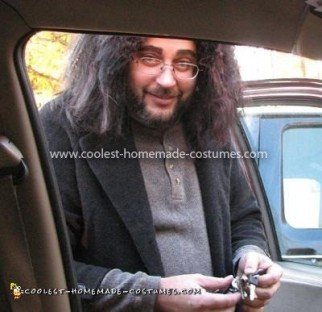