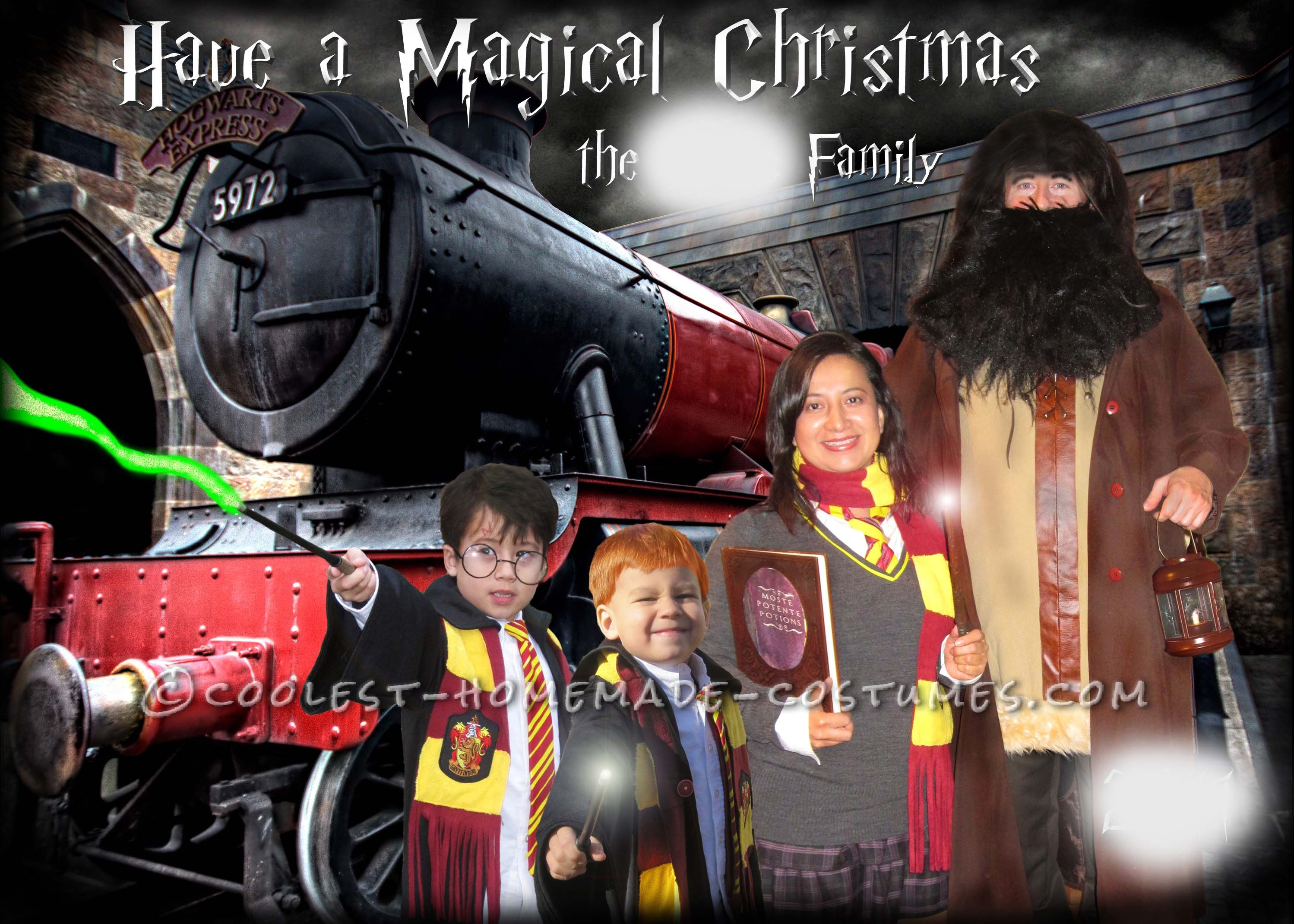 My now 8 year old son is a big HP fan, so we decided to make it into a family adventure for Halloween. The main objective for us in Halloween is to make our costumes budget friendly and original. So even that my son was going to be Harry Potter I wanted him to look differently than any store bought costume. We generally combine some bought items, with some homemade. There were lots of challenges but we had so much fun. One of the biggest challenge was to make my 6’6″ husband appear to be a giant as he decided he was going to be Hagrid. But as you can see in the pictures we did it! He is an elementary school teacher and the kids did not recognized him at all!

We had so much fun doing and wearing the costumes that we actually made it into our Christmas Card that year, wishing everyone a Magical Holiday! This is that picture my husband did some photo shop that I think looks awesome.  I hope you enjoy it as much as we did.

Harry Potter and Ron: For my sons I did buy the Harry Potter costume robe but I added some buttons on the front to make it different. A white collar shirt underneath. Black pants. For the scarf I bought burgundy fleece material and cut the ends to make it look more like a scarf. Then I bought bright yellow kitchen towels that were on sale and cut them into wide stripes to add to the scarf and saw them on. I ordered an iron on Hogwarts Shield on Ebay and actually saw it to the material. Now the tie required some patience but I think it was well worth it.

I bought an inexpensive red kids tie at the Good Will. Then I bought yellow electrical tape. I cut wide and thin stripes and glue them one by one to copy the patter of the original HP tie. Nobody noticed it was tape until I told them

Glasses bought the costume ones.

Wand: They had an Universal HP wand they got for their birthday, but we also made one for each one of them to take to school, Picture is attached. Google wand making and you will find it. The base is a chopstick that you cover with paper, hot glue paint and lots of imagination.

Props: As an additional item I gave him a white owl that he carried in a little basket. Originally it was going to be a cage but run out of time to make it or find one.

Scar: Draw it with lip liner 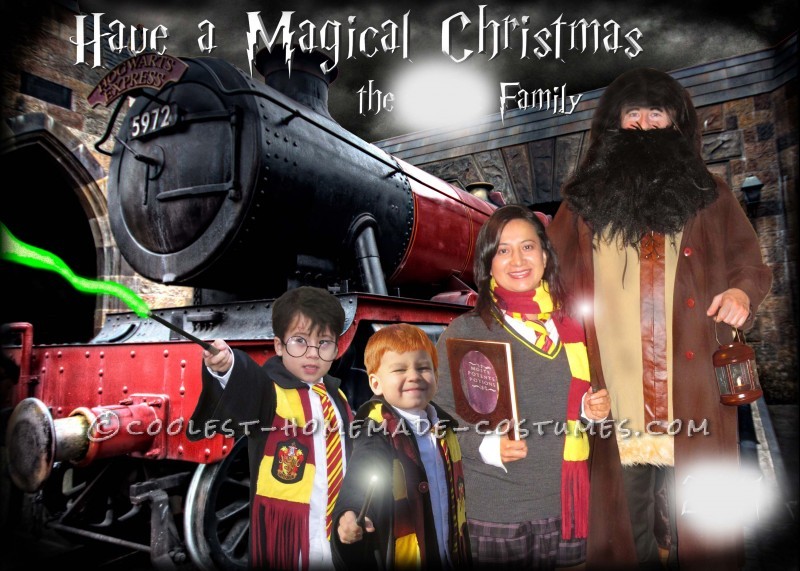 Hagrid was a lot of work but also a lot of fun. As I mentioned my husband is not exactly the tallest guy in the world, so there lied our first challenge and fortunately what he lacks in stature he makes up in creativity so he attached empty gallon paint cans to old boots. He used hot glue and actually drill some holes and put a nail to assure that he could walk on them without falling. I had an old pair of sued pants. WE open them up and each leg hole was now used to cover the new set of Hagrid shoes.

For his clothes we used an XL viking costume that I found in the Good Will. We put a pillow inside for his belly.

For the hair we used a wig and for the beard we used the hair that was attached to one of those scary masks. We cut part of it to look like the mustache. It had a net under it so we were able to cut a hole for the mouth and made some loops to go around the ears.

Bouth an used XL brown rain coat and a lantern as a prop. He also had a pink umbrella. 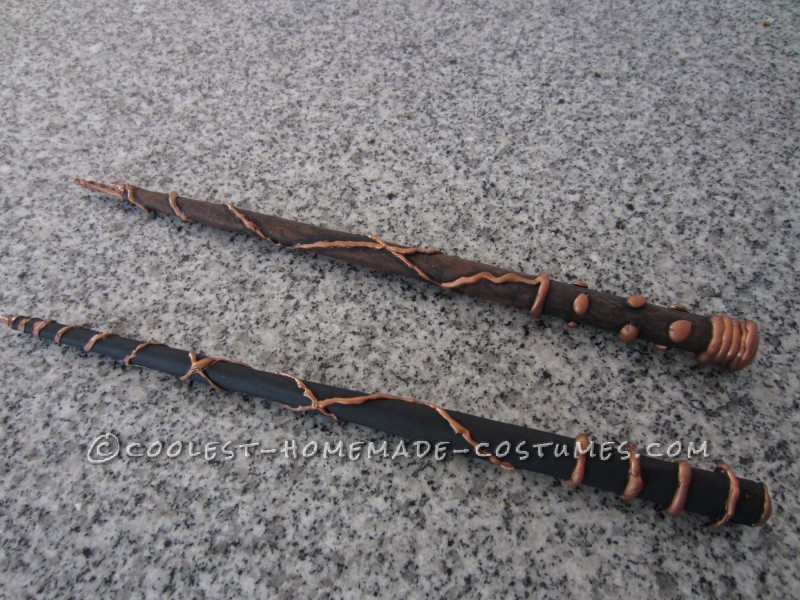 Finally for my costume as we were already exhausted we kept it simple. I had my own wand. I found a book with an interesting cover, that look rustic and old and print the tittle “Moste Potente Potions: on the front and also the spine of the book. I used a school girl skirt and made myself an scarf  and a tie too. I wore a grey sweater to which I added a yellow electrical stripe. 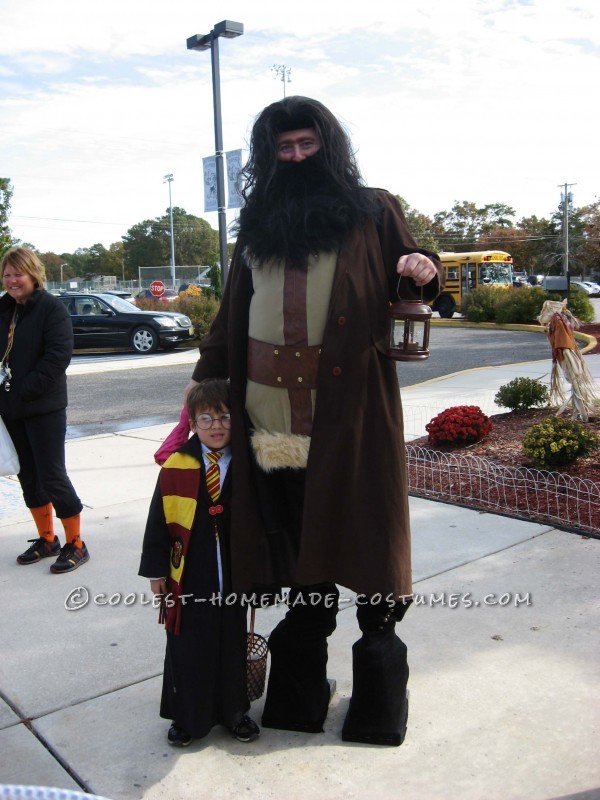