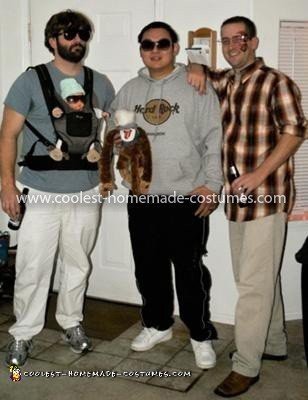 I dressed up as Alan from the Hangover. My friend was Mr. Chow and my brother was Stu.

My costume had white pants, a baby carrier, baby doll, a wig, custom t-shirt, sunglasses, and beard dye. I made the t-shirt with my heat press, printer, and transfer paper.

Mr. Chow’s costume had a sweatshirt that I made with my heat press as well. His monkey had a jean jacket that was made out of an old pair of pants and a patch that I made as well. My wife stitched up the monkey’s jacket and sewed the patch on the back of his jacket.

Stu’s costume was made from clothes bought at thrift stores. His face tattoo was bought online, and I outlined it in red to make it look fresh.

We stayed very close to the outfits worn by the actors in the two movies by shopping at thrift stores and making what we couldn’t find. A lot of time went into making these Hangover Group Costumes as close to the actual characters’ as possible.

We were a wolfpack of three!