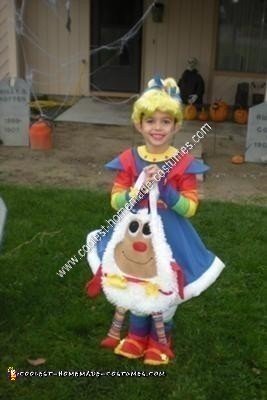 My friends daughter decided on a DIY retro Rainbow Brite girl’s Halloween costume idea. Of course we were excited to make this costume since we grew up with rainbow bright!!!!

I used a basic dress pattern and altered the sleeves to create a pointed cuff and added batting in between the rainbow arms and sewed along seams. On the hem line we added glitter felt casing and stuffed it loosely so it would flare out a bit. We made a little vest and attached the rainbow and star to it. I made her matching rainbow boot covers.

We altered a Cinderella wig by attaching a blue ribbon and star to the pony tail and pulling bangs down. Her momma added a small glittery blue star to her cheek.

For her bag we decided she needed the sprite. I used some curly white fabric and created a circular bag. I then used felt and embroidered his little face on. I made his legs from some rainbow striped fabric and stuffed them a bit. We used pipe cleaners and attached stars for his antennae, then stitched them to the handles to keep them up. It turned out cute.

The end result of this DIY retro Rainbow Brite girl’s Halloween costume idea was great and it was a lot of fun to put together.