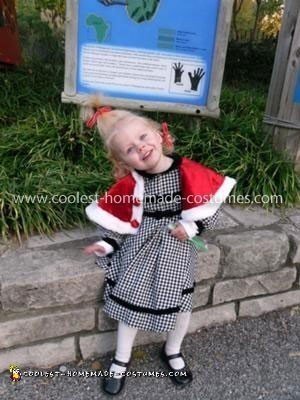 During the chilly months, friends, family and strangers constantly comment on how much our daughter, Isabella, looks like Cindy Lou Who with her red and up-turned nose and sweet demeanor.

I kept that Cindy Lou Who Costume idea in the back of my mind when I ran across the perfect dress at a second-hand store, black and white plaid just like the live-action film for $6.

After I had the dress, the rest was easy. I found black, patent-leather style Maryjane shoes at Target for about $9 and already owned some warm, white tights. The next part of the costume was the Santa Clause-esque shawl Cindy Lou Who wore on her shoulders. I ventured to a craft store, assuming I’d find material to sew (which worried me because I’m not a seamstress). Instead, I found a mini-tree skirt for $10. I folded in the velcro edges of the tree skirt and then attached the tree skirt to the shoulders of the dress wth a small safety pin (instead of around her neck).

The final step was Cindy Lou’s hair. I sectioned Isabella’s hair into three sections: one on top, and two bottom sections for braids. I made a cone out of cardstock and pulled her hair over the cone and tied it on top with a hairband. I braided the bottom sections and tied them on the ends with two more hairbands. I used red and white polka-dot ribbon to cover the hairbands and Cindy Lou was complete! 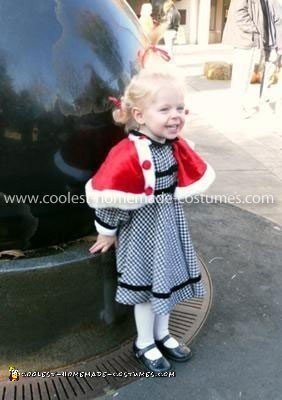