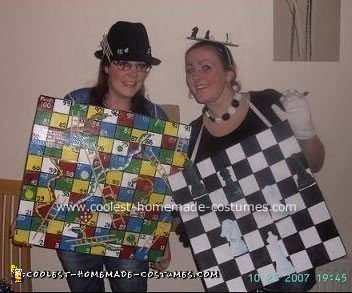 Who says Halloween is just an excuse for girls to dress up in the skimpiest costumes? Not me and my sister! Every year we try to come up with something we’ve never seen before so last Halloween we decided we would be Snakes and Ladders and Chess!

It took a while making the board games costume because of the detail but other than that its really easy! Just get a couple of cardboard boxes, some paint, some dice and some chess pieces! As you can see you just paint!

For the hats, the snakes and ladders costume is a trilby hat with a ladder made from lollipop sticks and a cardboard snake and the chess hat is a circular piece of cardboard painted like a chess board with chess pieces glued on! Black and white clothes, and to finish it off some gloves!

It was great fun being a board game and we even played a game of snakes and ladders later that night!

1 thought on “Coolest Board Games Costume”