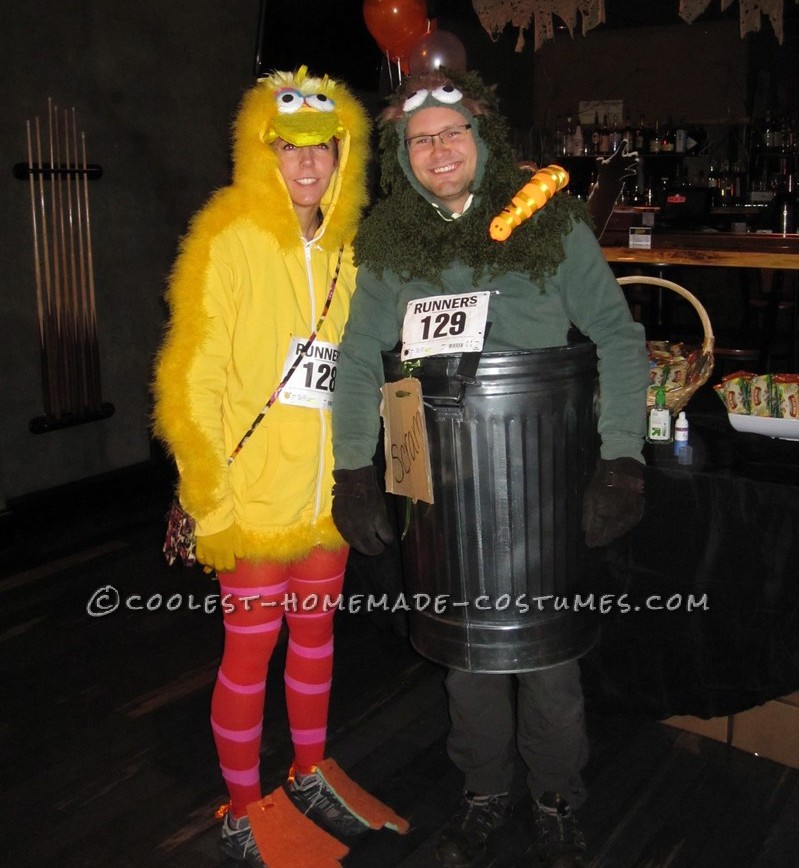 Each year, there is a 5K race done in our area around Halloween to raise money for Cystic Fibrosis.  Not only is this a great cause, it is really fun to be in costume running a race!

We decided to go as Big Bird and Oscar the Grouch.  Both were a lot of work but, a lot of fun to wear (and run in!).  For Oscar, I bought a dark green hoodie and dark green yarn.  I started weaving the yarn into the hoodie with a large yarn needle.  I pulled the yarn through, cut, tied it off and pulled it apart so it would look like messy, matted fur.  It looked great but took forever!

After a few hours of that, we cut pieces of yarn, a few inches long, tied them in a knot and pulled apart the ends and used a hot glue gun to attach it, it was much faster and held!   We then got a metal garbage can, cut out the bottom, beat it up a bit (Oscar did not have a shiny, new can!) and sprayed it with some black spray paint.  The eyes were made out of felt with some brown craft fur for the bushy eyebrows.

Big Bird was a little easier, once I found a bright yellow hoodie, a men’s extra-large (to make my bird big).  I made a tail out of foam and feathers which I tied around my waist.  I glued feather boas on the arms, on the hood and around the bottom.  The eyes were made out of felt and the beak was made out of foam and felt and attached to a baseball hat for support.  Velcro attached to the hat and the hood kept everything together.  The shoe covers were more foam and felt, tied on with ribbons.

The race was a success!  He ran the entire 5K in the garbage can, knees were banged up a bit but, he made it!  With everyone in involved in the race, $11,000 was raised for Cystic Fibrosis!