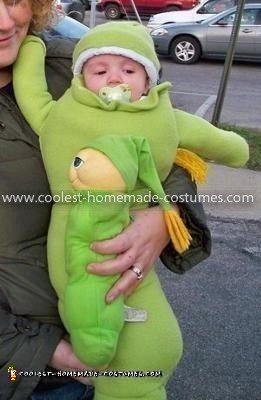 We made my daughter a baby Glowworm costume, fashioned after the old-school original toy. It was a bunting costume, since she was only 3 months. Kept her arms and legs nice and warm and bundled up.

I got some soft green material and lined it. Stuffed the ribs of the Glowworm body so that they were puffy. There was velcro in the back to get her in and out. I was originally going to put her arms in the Glowworm arms, but she didn’t really care for that. I stuffed them instead and left her arms inside the body.

I made a little green hat with translucent lining around the face. I sewed a string of battery operated lights into the lining around her face so that you could flip the lights on and it would look like her face was glowing like the original Glowworm toy!

The Baby Glowworm Costume was super cute. She was happy and snug as a bug… or worm… all night! 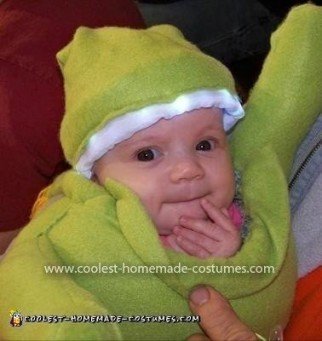