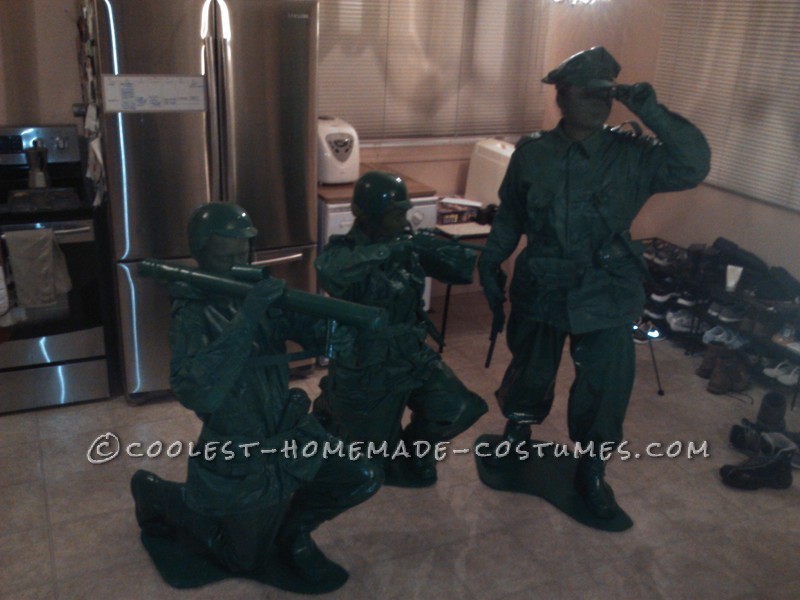 The idea for the Green Toy Soldiers:

Driving back from Disneyland we decided we really wanted to dress up as the army men from Toy Story. We wanted to make it as authentic as we could so Googled lots of peoples ideas and found ideas.coolest-homemade-costumes.com

After lots of searching we found old army jackets and bought Doc Martin type boots and cloth belts in a second hand store. We bought cheap rain pants because we thought they would have a plastic effect.  We bought police costume helmets and a hat and took off the visors and police badges. We bought some random rifle and gun packs in the dollar store that included toy walkie talkies, binoculars, belt bags and grenades. We used gloves for our hands as quite a few people on this website had suggested that they struggled to keep the paint on their hands all night. Finally, we found a pool/snooker cue holder bag which, with some toilet roll holders became a bazooka.

Again on the advice of people on this website we bought high gloss green latex paint from home depot. We went for the Behr brand. The lady there was very helpful and advised us on primer and lacquer/varnish for the top coat.

We primed the army jackets liberally then painted 1 coat on heavily. This cost us a lot of paint as it dried into the material very quickly. When we got to the last jacket we realized we could do a lighter first coat, let it dry and harden and then do a second coat that didn’t soak through.

The rain pants did not need primed as they were quite shiny to start with. We primed the boots, belts, belt bags to make sure the paint stayed and looked shiny. Everything got 2 coats of paints and touch ups (the rain pants needed 3 light coats as they were so shiny the paint was runny). We lacquered the jackets, pants to help the paint stay on and anything else that looked too matt.

We attempted to make our own face paints with food coloring, cornstarch and body cream but found that either the color stained our faces or went too cakey with the cornstarch when we corrected this. So we bought  ‘Snazaroo’ face paint from Michael’s which was hypoallergenic and with 2-3 coats gave us the identical color we needed.

Hope this is useful for anyone else with the same idea. 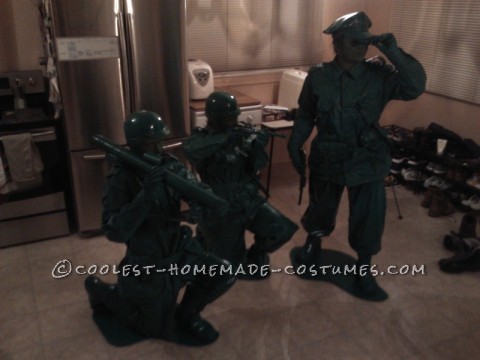 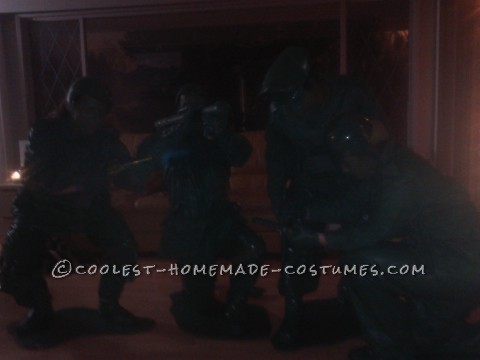 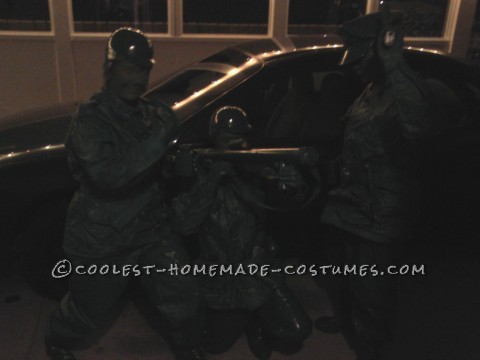