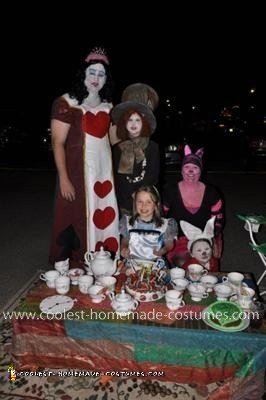 Our family choose a Homemade Alice in Wonderland Group Costume as our Trunk’R’Treat Theme. We planned it around the UnBirthday Party so we used our china and others china. We made a homemade UnBirthday cake plus we had a small eat me cake. We decided to do something that NO ONE would have expected which was to have my husband dress as the Queen of Hearts.

To make this costume, we used an old bridesmaid dress which was my sister’s. She was expecting when she wore it so my husband could fit it. We painted the dress with red, white and black spray paint. The hearts were made of felt. The gold trim on the dress were my husband’s honor cords that he wore when he graduated from college. We got the make up idea from the movie. We didn’t think the Queen of Hearts was meant to be very pretty. My oldest daughter was the Mad Hatter. I don’t know where to start. The pants were spray painted and the patches were old quitting squares that I had. I found the jacket at Good Will and we spray painted it too. The tie was made from old material that we had laying around and we spray painted it. We found the shoes at Good Will. Socks are toe socks that my daughter had.

We dyed her hair. Makeup, we tried to capture the look from the movie. The hat is so hard to explain but we are proud of. Old material, spray paint and cardboard. The bow around the hat is a scarf. My middle daughter was Alice which was the only costume that we didn’t make. So PLEASE do not include Alice. She was just in the picture. My youngest daughter was the White Rabbit. We used stuff that we already had like the white pants, red dress coat and white shirt. We put some bunny ears on her and pinned a tail to the coat. I was the Cheshire Cat. My sister helped me with this outfit. It was easy and hard at the same time. The hat, ears, undershirt and the legs were all made of tights that I found. The fuzzy skirt and shoes wer made from a fuzzy blanket that my daughter had. The black shirt I already had. We really enjoyed making these costumes.

It was so much fun. I especially enjoyed making the Mad Hatter’s Hat. I totally loved the way it turned out actually the whole costume turned out really great. We still have the hat because we are so proud of it. I hope you enjoyed the pictures of our version of Alice in Wonderland. 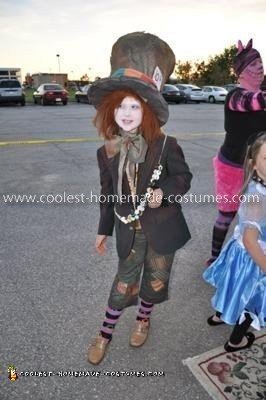 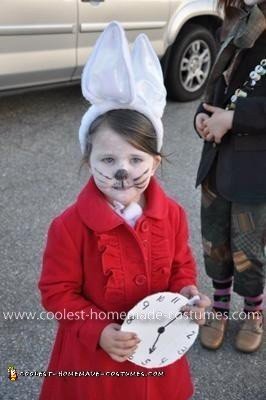 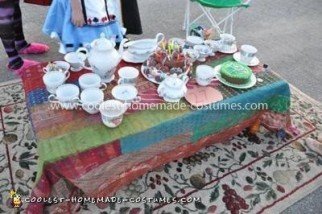