This Homemade 80’s Camp Counselor / Jason Voorhees Victim Costume is actually my 2009 Halloween costume. It was the first year I didn’t have a costume planned, but at the last minute a friend and I decided to go out. I already had a cheap Jason Voorhees mask laying around, so I wanted to incorporate that somehow, but I also wanted to look cute. It took about 20 minutes to think of and make this costume, so although it isn’t as polished as I would have liked, I think it’s pretty original. I definitely didn’t see anyone else wearing anything like it, and it was a great conversation starter with horror movie buffs.

I grabbed an old T-shirt, wrote “Camp Crystal Lake” on it in Sharpie, and splattered some fake blood on it. I put on some denim shorts, a red jacket that I thought looked outdoorsy, and summery wedge heels. I put my hair in a side ponytail as an homage to the 80’s (The decade that made all of the best “Friday the 13th movies!) and applied my makeup as usual.

I splattered some cheap fake blood across my shirt and neck before realizing that I had a leftover jar of coagulating fake blood left over from the year before. So I applied that as the wound, but I still had the other stuff dripping down my chest. DEFINITELY get the kind that dries up, it looks so much better and is a lot less messy.

Finally I strapped the Jason mask to my belt, because I would never be the kind of horror movie character to go down without a fight! 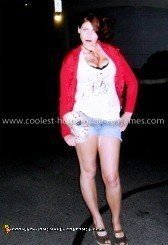