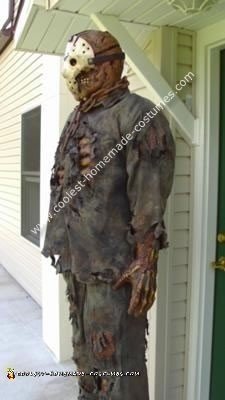 Hi my name is Brad from SirBrad’s Horror FX, and I design life-sized movie quality costumes of horror icons. I specialize in Jason Voorhees, Michael Myers, Freddy Krueger, Madman Marz, Jeepers Creepers, Terminator, Leatherface, and many more! I have been featured on DVDS and the official F13th website several times now. I grew up on horror movies and I started making Jason and Myers costumes in the early 80’s as a kid, and now today I design costumes for people worldwide! I have done more Jasons than any other costume so far, as he was always my favorite overall. I have been designing costumes at this level for about 3 years now, and this year things have really picked up!

One of my favorite looks for Jason is from Friday The 13th part 7 (The New Blood) where Jason battles Tina who has telekinesis,(which allows her to manipulate objects by thought). This is also the most requested costume from all of my customers who hire me to make one as a commission, probably because it looks so cool with all the rotten body parts and ribs/spine etc. It is also the hardest and most time consuming to make! I decided to start making costumes like these because I got tired of all the cheap looking, crappy, mass-produced costumes in stores. It took me a lot of trial and error to get to the level I am at now. With my first one I ordered a Rubies costume and cut out all the parts from the clothes, I then repainted them with acrylic paint and attached velcro straps.

I also repainted the mask to match, and got an extra one to cut the face out of to use as an underhood, which is easier to breath and see out of. I also got the idea to buy some generic skeleton gloves, which were just white latex bones attached to a black sleeve, and I created my own custom rotted skeleton hands by adding latex, toilet tissue, cotton, oatmeal, acrylic paint, and gloss. They turned out great! I also got some plastic Halloween chains and repainted them to look rusty and more realistic.

I bought the shirts and pants from the thrift store and began to shred them up with various tools, knives, scissors, wire brushes, etc, and tried to match all the cuts by pausing the DVD and watching it literally hundreds of times. After that I use acrylic paints watered down, and some mixed with 50% latex to paint the latex pieces, and paint the clothes up to look like they were naturally decayed, dirty, and filthy from the grave. Sometimes I add cobwebs for part 6 “Jason Livess.” I then put on all the latex parts and match up all the clothes cuts, and do final touch ups while on my mannequin. I then posted pics on horror forums and everyone loved them, and begin asking me if I sold them etc, and then it became a part-time job for me. I also a local celebrity every Halloween and I take part in a lot of Halloween events and will every event each year, either 1 place, scariest, or best overall. I love doing the parades outdoors since it is less hot wearing all that latex. I also paint up hockey masks now as well. I used to just buy the hockey mask online to save time. Sometimes I also add mesh to the eyeholes of the hockey mask for certain parts, part 6-9 etc. I aslo made my own axes out of a real wooden handle and thick cardboard, which look real even in daylight! That is bascially it for this New Blood Jason Voorhees Costume. 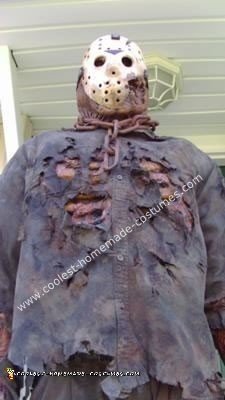 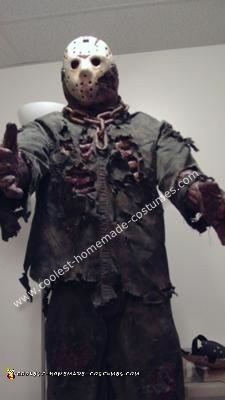 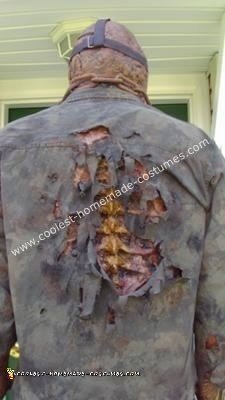