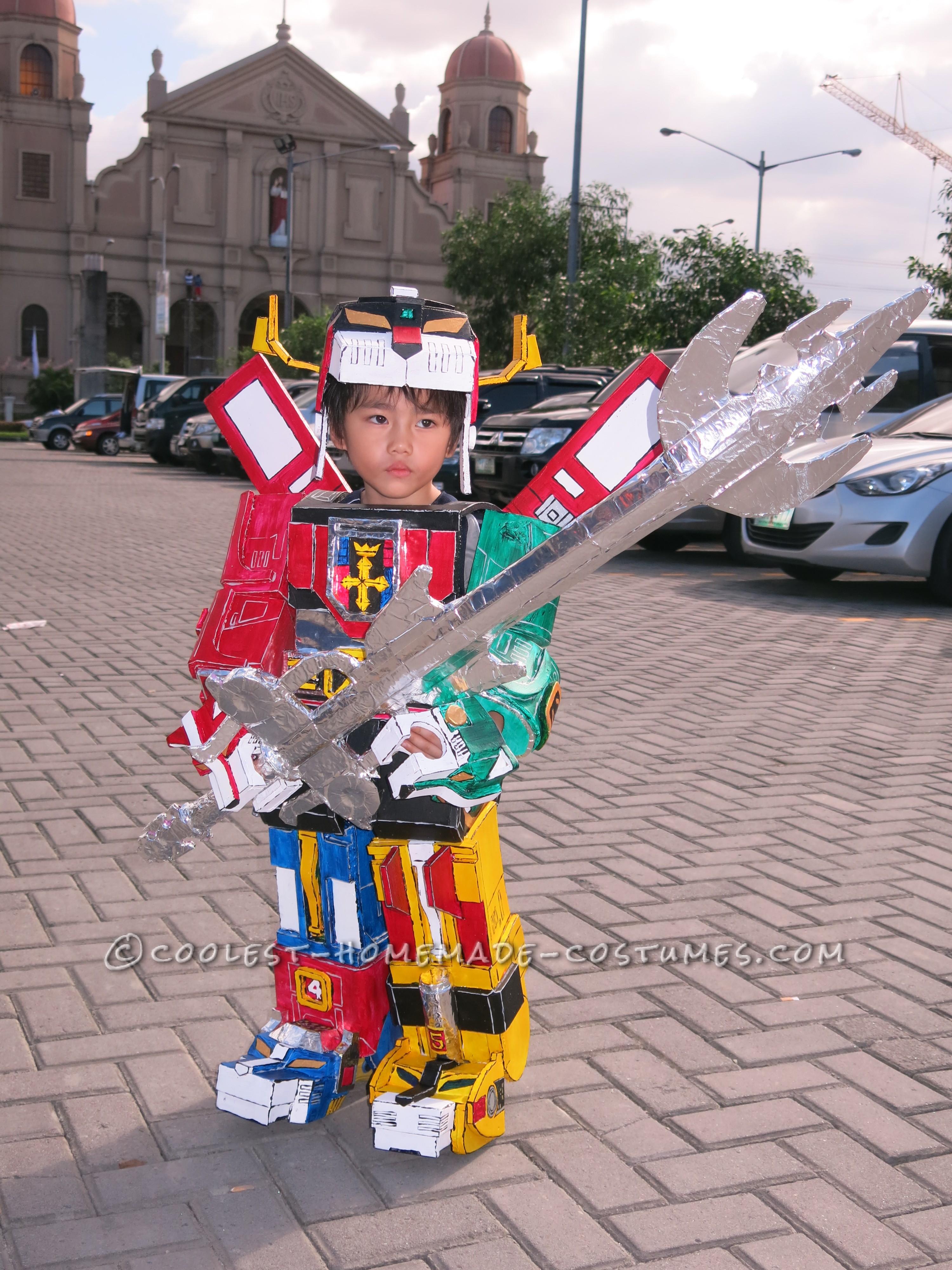 I bought a Lionbot toy this year from Taiwan so my kids wouldn’t ask to play with the 30th Anniversary Toynami Voltron I ordered.  My 3-year old son liked it so much that he asked to be Voltron for Halloween this year.  After checking tutorials on YouTube using foam mats, I decided to try to attempt to use foam mats for the Voltron costume.  This will be my first time using this material for a costume.

On October 20, 2014 I started cutting up old floor mats we had at the house.  It was easy to work with.  Just make sure you use a sharp blade.  The first day I used an old Xacto knife and the edges weren’t sharp.  It was time consuming to make the heads.  Especially the black lion head.  After I was done making the costume it was time for a test fit.  It was difficult for my son to walk.  I was worried.  Luckily I thought to add straps to the leg Lions to hug his leg tighter.  Most Voltron costumes I’ve seen online have the Lion Legs so short compared to the arms, so I made sure they were bigger and longer than the arms.  I had to cut the back part of the legs shorter so my son could bend his knees.

I wanted the crotch area to look like the toy, so I made that flair out like a Gundam skirt piece.  It retained the look of Voltron while not limiting leg movement.  I coated the costume with a 50:50 mixture of wood glue and water to seal the foam and give the paint something to stick to.  On the 7th day I was ready to paint.  I was worried about the paint drying in time for Halloween.  The paint dried faster than I thought it would, it only took about two hours to dry.  I was finished ahead of schedule.  I looked back at the costume and thought it had lost a lot of detail that was visible before painting it, so I highlighted every edged with paint and added some more details.

To get the chrome look, I used chrome tape that I found in the hardware store (it’s kind of like tin foil with a sticky backing).  I also painted the little computer details on the top of the blue lion’s head and the side of the yellow lion.  I rushed to make the sword Halloween morning.  I used a foam sword from Toy’s R Us as the base, then used foam mats and craft foam to construct the other parts.  Than I covered it with the chrome tape. 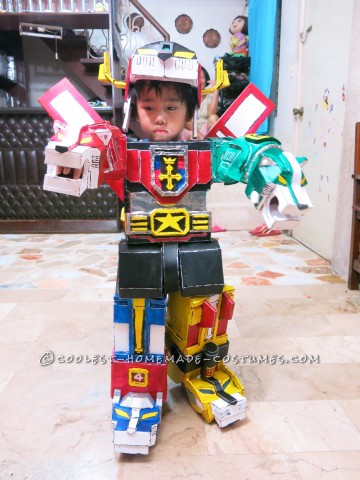 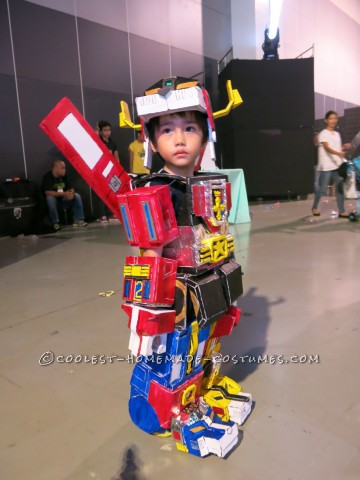 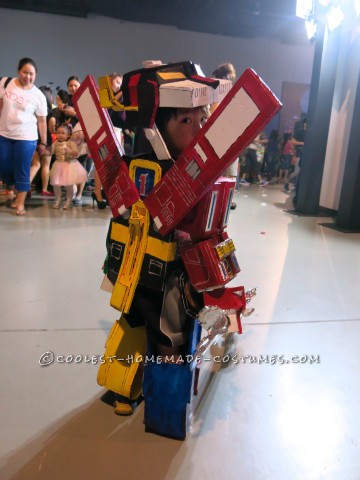 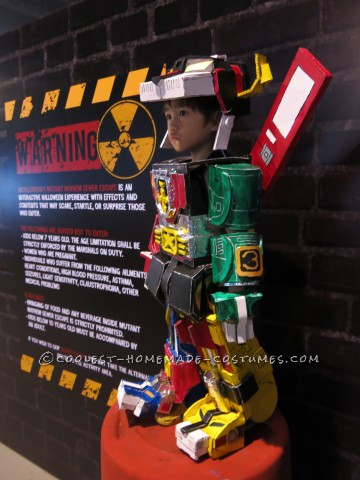 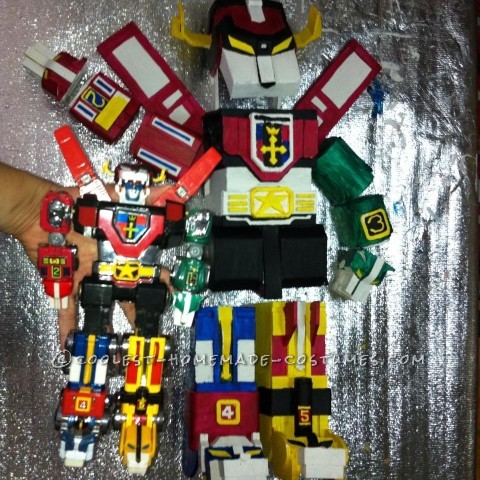 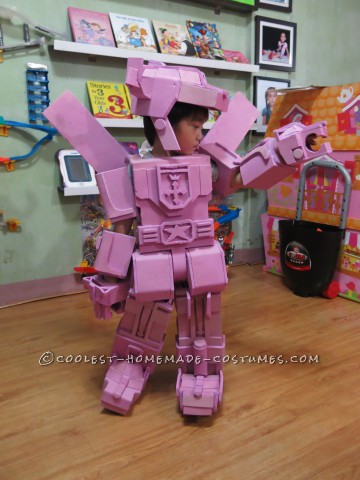 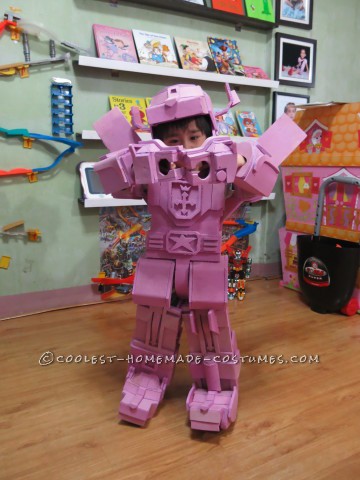 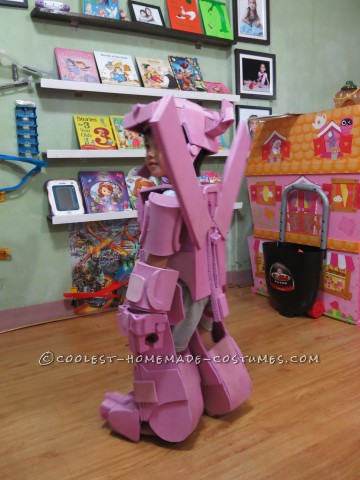